Helen Raikes, an associate with the Center on Children, Families and the Law at the University of Nebraska, Lincoln, and a consultant to the U.S. Department of Health and Human Services, will discuss "Long-Term Impact of Early Intervention for Children and Families: Lessons from the Early Head Start National Evaluation Study" at 7 p.m. Tuesday, Oct. 25, in the Gallery Room, Memorial Union. The event is free and open to the public.

Raikes is the Barbara E. (Mound) Hansen Early Childhood Lecture Series Endowed speaker for the department of human development and family studies in the College of Human Sciences. She also is professor of child development in the department of family and consumer sciences at the University of Nebraska.

In addition to the Early Head Start research, Raikes has headed child-care studies in the Midwest, and was formerly a research associate and director of infant-toddler child care at the Gallup Organization, Princeton, N.J.

The national study looked at 17 Early Head Start program sites in the United States. It followed a group of children, their families and a control group from birth to age 5.

In Iowa, home-based programs such as Marshalltown's MICA were shown to offer positive results for 5-year-old children, Raikes said. For example, she said those programs provided support for parents with opportunities to learn skills for promoting children's language and literacy.

Children enrolled in Early Head Start showed significant gains in learning and social skills by age 3. Some of those gains were sustained to age 5 for all children. Children who participated in the Early Head Start program from birth to age 3 and in Head Start or other early childhood programs from ages 3 to 5 fared better in all areas of development than children who were never in programs or who were enrolled in programs at one time or the other, but not both. Those gains were notably seen in African American children and children in the home-based programs.

"This study has implications for policymakers and practitioners," Raikes said. "For example, what are the implications of continuous services for children age 0 to 5, and what works for children with disabilities and what areas of development, such as language skills and mental health, respond to intervention. This study supports the importance of 0 to 5 services and provides support for the home-based program option for very young children and their families."

Established in 2001, the Hansen Early Childhood Education Lecture Series Endowment is made possible by a gift from Richard and Barbara (Mound) Hansen. The Hansens created the series to bring contemporary, issue-oriented topics on early childhood education to the College of Human Sciences. 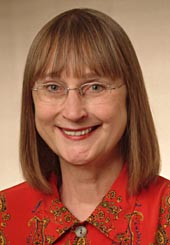