A Century of Iowa Architecture on display at ISU Oct. 3-28

AMES, Iowa -- Considering the many connections between Iowa State University and Iowa's finest architecture, the campus arrival of the traveling exhibit, "A Century of Iowa Architecture, 1900-1999," will be something of a homecoming.

ISU's College of Design will host the exhibit Oct. 3-28. It features photographs of the 50 buildings considered the best of Iowa's 20th-century architecture. They were selected last year by a jury in conjunction with the 100th anniversary of the Iowa chapter of the American Institute of Architects (AIA).

Final selections are a mix of buildings by internationally known architects like Frank Lloyd Wright and Frank Gehry, and by leading Iowa practitioners, including many ISU architecture graduates and faculty.

"A Century of Iowa Architecture" was unveiled last October at the State Historical Museum in Des Moines. It has appeared in Waterloo, Sioux City and Dubuque. In January, it travels to Mason City.

The exhibit will be in Gallery 181, first floor of the College of Design building. Hours are 9 a.m. to 5 p.m., Monday through Friday. The exhibit closes at noon, Oct. 28. An opening reception will be 5-7 p.m. Tuesday, Oct. 4, in Gallery 181. The exhibit and reception are free and open to the public. Signed copies of the 112-page companion book by Alread and Campbell will be available for $20 (cash or checks only) during the reception or afterwards in 134 Design.

ISU architecture students built museum-quality models of Prairie School buildings, like the 1918 Woodbury County Courthouse in Sioux City, that are in the Century of Iowa Architecture exhibit. 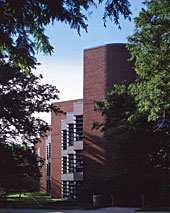 AIA exhibit Agronomy The 1986 addition and expansion to ISU's Agronomy Hall is considered one of the best Iowa buildings of the 1980s.

Many of the buildings in The Century of Iowa Architecture exhibit were designed by Iowa State architecture faculty and alumni, including the University of Northern Iowa's Maucker Union Building, designed in 1969 by Mark Engelbrecht, ISU's dean of design.