AMES, Iowa -- Jerry Colver had visitors to his Iowa State University laboratory cover their ears. Then he powered up his test rig and -- SNAP! -- what looked like a bolt of blue lightning popped through five test chambers.

Colver, an Iowa State emeritus professor of mechanical engineering, will use that spark to ignite and burn combustible powders uniformly suspended inside narrow test chambers as part of a test for the National Aeronautics and Space Administration. 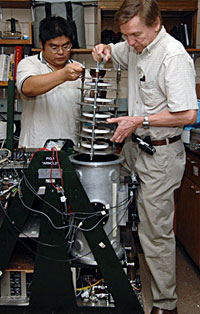 But it's not just a matter of exploding powders in a lab. He'll ignite powders as they drop eight stories at NASA's Glenn Research Center in Cleveland. During the drops, the test rig will accelerate to a speed of about 50 miles per hour and approach zero-gravity conditions before landing in an air bag. The test drops are scheduled to begin in early August.

NASA is supporting the research with a $395,000 grant. NASA scientists want to learn how much of a gap there needs to be in a test chamber before powders will ignite. Colver said the research is important to NASA for improving fire safety and developing a new safety standard. He also said the research will advance scientists' basic understanding of flame theory.

"We want to know under what conditions powders will burn, their flammability and the ignition power required," Colver said.

Aluminum powder -- one of the powders Colver will be testing -- is very explosive, he said.

But quantifying that explosiveness isn't easy to do. For one thing, it's a major challenge to control the suspension of powder in the air. Sending the powder up in a puff of air doesn't provide much control or uniformity.

But that means the test rig has to withstand deceleration g-forces equal to 30 times its weight. And the experiment has to happen in the 2.2 seconds of free fall.

That's one reason Colver designed his experiment with five test chambers. He can run five simultaneous experiments for every drop. With up to seven drops in a full day of testing, that's 35 experiments to analyze.

Colver is anticipating two weeks of testing at the Glenn Research Center.

And when it's all done, Colver and graduate students Ryan Kroll and Hua Xu should be able to tell NASA something new about how powders burn and might even have data that show how a planetary rover could use combustion to safely test any powders it collects.

Iowa State researchers will drop a test rig eight stories to learn more about the combustion of powders as part of a research project for NASA.

"We want to know under what conditions powders will burn, their flammability and the ignition power required."