Why do some students cheat?

They rationalize it, ISU research finds

AMES, Iowa -- When people know that it's wrong to cheat, why do they do it anyway?

Because they distance themselves from their unethical actions -- they rationalize it -- according to a study co-authored by three Iowa State University College of Business faculty members and their former colleague.

ISU's Jeffrey Kaufmann, Sue Pickard Ravenscroft and Brad Shrader joined with former Iowa State professor Tim West (now at the University of Arkansas) to study the behavior of nearly 50 students from another Midwestern university who had cheated on a take-home exam.

Kaufmann, an assistant professor of management; Ravenscroft, the Roger P. Murphy Professor of Accounting; Brad Shrader, professor of management, and accounting professor West co-authored a paper titled "Ethical Distancing: Rationalizing Violations of Organizational Norms," which will be published in an upcoming issue of the Business and Professional Ethics Journal.

The research stems from a situation that West encountered a few years ago while teaching an introductory course in managerial accounting. He gave students a take-home test problem and requested that they complete it individually, without help from other students or the Internet. West was unaware that another professor had posted an answer key to the problem on the Internet. Students soon discovered the online key and many accessed it. But unknown to them, the college was able to track all who had accessed it.

West learned that at least 47 of his 64 students had cheated on the test. He threw out the test results, but decided to use the experience as an opportunity to study why the students had cheated. He collaborated with his Iowa State co-authors on the data collection instrument -- persuading students to anonymously answer a series of questions about what they did and why. There was a 100 percent response rate -- all students in the class chose to respond.

In an earlier study from the data, the researchers reported that there was no significant difference between cheaters and non-cheaters in their ability to reason morally. They found that all but two students knew the difference between right and wrong -- and that the core behavior was wrong and could be considered cheating.

In the current paper, they wrote that students tried to distance themselves from the wrongfulness of cheating using four types of rationalization:

"Our results have important implications for both our understanding of moral reasoning and for faculty/managers concerned with minimizing unethical behavior," the researchers wrote.

"For scholars, our study has two important implications. First, we show how factors that can be used to encourage ethical behavior can also be manipulated to encourage behavior that is unethical. We have also outlined a process that actors use to actively rationalize wrongful behavior. They engage in wrongful behavior not just because factors discouraging such behavior are ineffective, but because they actively seek justification for it."

"In the past, we've told students 'If you cheat, you are only cheating yourself.' Apparently, a lot of people are willing to do that," said Kaufmann.

Respondents gave the following reasons for their behavior:

"So far, based on the ethical climate questionnaire, we're finding pretty strong evidence that there was an ego-based climate there (at the school where the cheating took place) -- a pretty healthy climate for self-interest," said Shrader, who teaches business ethics at ISU. "Business schools tend to teach self-interest as a motivator, so in some cases, we do it to our own students. Some of the basic theories of business are grounded in self-interest."

Researchers plan to present their research at an October forum through ISU's Center for Excellence in Learning and Teaching. They are also preparing a final paper on the study. 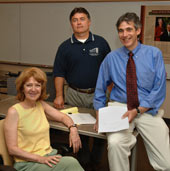 "In the past, we've told students 'If you cheat, you are only cheating yourself.' Apparently, a lot of people are willing to do that."