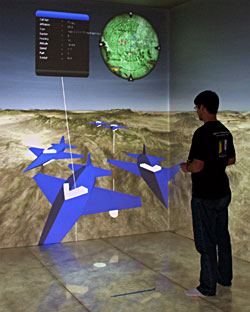 Iowa State's C6 opened in June 2000 as the country's first six-sided virtual reality room designed to immerse users in images and sound. The graphics and projection technology that made such immersion possible hasn't been updated since the C6 opened.

The difference between the equipment currently in the C6 and the updated technology to be installed this summer, "is like putting on your glasses in the morning," said James Oliver, the director of Iowa State's Virtual Reality Applications Center and a professor of mechanical engineering.

The new equipment -- a Hewlett-Packard computer featuring 96 graphics processing units, 24 Sony digital projectors, an eight-channel audio system and ultrasonic motion tracking technology -- will be installed by Fakespace Systems Inc. of Marshalltown. The project is supported by a U.S. Department of Defense appropriation through the Air Force Office of Scientific Research.

The project began this spring with a prototype upgrade to one wall of the C6. The remainder of the work will continue throughout the summer. Oliver said the improved C6 will open in the fall. A grand opening celebration is being planned for the spring of 2007.

A better C6 will be good news for the Iowa State researchers who study virtual reality.

Chiu-Shui Chan, an Iowa State professor of architecture, has used the C6 to develop 3-D models of buildings, cities and workplaces. He's studying how virtual reality can be a tool to create a library of historical buildings, plan urban growth and test workplace efficiency. 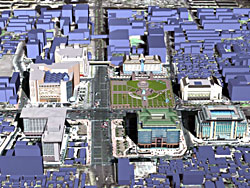 Chan said the upgrade will improve the visual realism and interactive speed of his virtual reality applications. And that will enhance the sense of place in his applications and the effectiveness of his research.

Chan said the C6's existing technology requires him to balance and sacrifice some of a project's size, speed, realism or human-computer interaction. "With the new system I won't have to worry about that," he said.

Eve Wurtele, an Iowa State professor of genetics, development and cell biology, working with Julie Dickerson, an Iowa State associate professor of electrical and computer engineering, has used the C6 to develop new ways to visualize data from as many as 22,000 genes. She's also developing a virtual cell project that shows cells in 3-D action to help students learn about photosynthesis and other aspects of cell biology.

Wurtele said the higher speeds and better pictures will be a boost for her research and teaching.

"This upgrade is fantastic for us," she said. "It's essential for our research."

Bryden also said the upgrade will put the C6 back on the leading edge of technology. He said that will help researchers attract projects and funding.

Oliver is leading a research team that's developing a virtual reality control room for the military's unmanned aerial vehicles. The researchers are building a virtual environment that allows operators to see the vehicles, the surrounding airspace, the terrain they're flying over as well as information from instruments, cameras, radar and weapons systems. The system would allow a single operator to control many vehicles.

The C6 upgrade will move that project forward, Oliver said.

"The idea is to get the right information to the right person at the right time," he said. "There's a tsunami of information coming toward you and you have to convey it effectively. We think this kind of large-scale, immersive interface is the only way to develop sophisticated controls."

So those 100 million pixels are going to make a difference, Oliver said.

"Seeing is going to be believing," he said. "This upgrade will enhance our ability to amplify the creativity and productivity of people. It will help us build on the center's record as a world leader in virtual reality. And it's one more way Iowa State can be the best at putting science and technology to work."

"This upgrade will enhance our ability to amplify the creativity and productivity of people. It will help us build on the center's record as a world leader in virtual reality. And it's one more way Iowa State can be the best at putting science and technology to work."