AMES, Iowa -- The students in Iowa State's Formula SAE garage expected this to be a rebuilding year.

But their ethanol-powered and ethanol-sponsored car raced all the way to seventh place in a field of 140 student-built cars at the Formula SAE competition May 17-20 at the Ford Proving Grounds in Romeo, Mich., according to official results released May 25. The annual competition is sponsored by the Society of Automotive Engineers and tests students' ability to design, build and race mini, open-wheel racecars.

"We had an excellent car," said Tony Sartor, the team's project director and a junior from Bettendorf majoring in logistics and supply chain management. "With the few people we had working on it and the experience we had, no one expected a top-10 finish. It was just amazing."

Last year's Iowa State team finished 18th in a field of 140. That had been the team's best finish. But the team lost a lot of those members to graduation.

Sartor said the team's strategy for this year was simply to improve on the weaknesses of last year's car. That meant getting more power from the engine -- this year's Kawasaki ZX-6R produced 85 horsepower compared to last year's 65. It also meant designing and building a suspension that actually helped the car take corners and grip the track. And it meant raising about $55,000 in parts and $45,000 in cash -- about twice the amount raised last year.

Kurt Olsen, the team's technical director and a senior from Newell majoring in mechanical engineering, said those changes made a difference on the track. The car placed third in the endurance race, a 13.6-mile run that features speeds up to 65 mph. And it placed seventh in the autocross, a quick and curvy half-mile time trial. The competition also featured acceleration and handling tests and presentations about costs, design, manufacturing and marketing.

Add up all the points and the Iowa State team had a top-10 finish.

So will there be a top-five finish next year?

That won't be easy. Olsen said it's easier to break into the top 10 than it is to move up within the top 10. 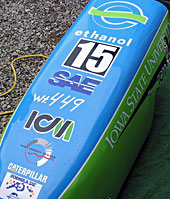 Iowa State's Formula SAE Team raced to a seventh-place finish at the Society of Automotive Engineers' annual competition in Michigan.

"We had an excellent car. With the few people we had working on it and the experience we had, no one expected a top-10 finish. It was just amazing."

Tony Sartor, the team's project director and a junior from Bettendorf majoring in logistics and supply chain management