An old discovery could boost ethanol production from plant fiber 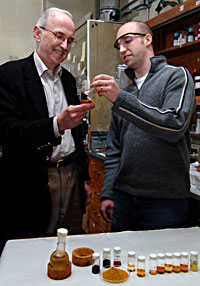 John Verkade, left, a University Professor of chemistry at Iowa State, and Reed Oshel, a graduate student in biorenewable resources and technology, are studying a chemical compound that breaks down plant fiber. That's something that could be very useful to the ethanol industry. Photo by Bob Elbert.

AMES, Iowa -- John Verkade remembers just how it happened some 40 years ago: One of his Iowa State University graduate students, David Hendricker, stopped by to report somebody was stealing a little wooden applicator stick from a beaker.

Oh, Verkade said, that's just a prank. Go hide around the corner and do some peeking until the joker shows up again. Thirty minutes later Hendricker was back in Verkade's office.

"You've got to see this," Verkade remembers him saying.

What they saw was a wooden stick falling apart and sinking into the chemical compound that had been the basis for Verkade's doctoral dissertation.

"That's an interesting observation," Verkade said at the time.

It was so interesting he asked Iowa State to consider a patent application. But that was a long time before breaking down plant fibers to produce ethanol was linked to energy independence and national security. So the university didn't move on a patent back then. And Verkade, now a University Professor in chemistry, moved on with his work in catalysis and molecular design.

A few years ago, George Kraus, another University Professor of chemistry at Iowa State, brought up Verkade's story of the dissolving wood. He said that compound could be a way to break down the tough cellulose that forms the structure of a plant's cell walls. Breaking down the cellulose can release the simple sugars that are fermented into ethanol. Making that happen could add some value to Iowa crops or the fibrous co-products of ethanol production.

Verkade followed up with a proposal for U.S. Department of Energy funding from the Midwest Consortium for Biobased Products and Bioenergy led by Purdue University in West Lafayette, Ind. He won a two-year, $125,000 grant and enlisted the research help of Reed Oshel, an Iowa State graduate student in biorenewable resources and technology.

They started using the chemical compound on distillers dried grains, a co-product of ethanol production. The initial results weren't encouraging. Verkade was ready to stop pursuing additional funding for the project.

But, earlier this fall, the researchers treated the distillers dried grains with equal measures of the chemical compound and water. That mixture broke down 85 to 95 percent of the cellulose so it could be dissolved in water.

"That opened a whole new door for us," Verkade said. "We knew we were tearing some things up in the cellulose."

They've since tried experiments on model compounds of cellulose. Those experiments have been promising. And now they're working to see if a simpler, cheaper version of the compound can also break down cellulose.

"We have preliminary evidence that it works, too," Verkade said.

Verkade isn't identifying the compound until he can explore the potential for patents. But he's working on a grant proposal that would keep the research going. There are still questions to answer about the compound's performance and characteristics as a pre-treatment for converting cellulose to ethanol. Verkade also wants to see how the compound works on corn stalks, switchgrass and other crops grown for their fiber. And tests need to be done to determine the compound's compatibility with fermentation enzymes.

"This is an exciting time," said the 72-year-old chemist. "I'm now cautiously optimistic about this."

A discovery some 40 years ago is showing promise as a chemical pre-treatment that breaks down plant fiber. That could release the simple sugars in corn stalks or switchgrass so they can be fermented into ethanol. And that could add value to Iowa's crops or the fibrous co-products of ethanol production.

"That opened a whole new door for us. We knew we were tearing some things up in the cellulose."

John Verkade, a University Professor of chemistry at Iowa State