AMES, Iowa -- "Lightning" is the name of Iowa State University's newest high-performance computer. The new machine's 376 processors can handle 1.8 trillion calculations per second and the computer can store nearly 28 trillion bytes of data.

"The machine is so fast that a month of calculations can be done in less than two hours," said Glenn Luecke, director of Iowa State's High Performance Computing Partnership and a professor of mathematics. "To successfully compete for research grants and to perform the research required for existing research grants, computational faculty must have access to these very fast machines." 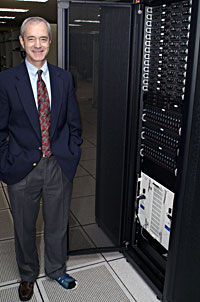 Lightning was purchased from Atipa Technologies for $480,000 with money from the Office of the Vice President for Research and Economic Development, the Office of the Chief Information Officer, and faculty who pooled some of their research funding. Iowa State researchers have been using the computer since mid-August.

This is the second high-powered computer Iowa State has put to work this year. In late January, Iowa State researchers turned on CyBlue, an IBM Blue Gene/L supercomputer capable of 5.7 trillion calculations per second and storing 11 trillion bytes of data. CyBlue was 99th on the most recent rankings of the world's 500 most powerful supercomputers.

James Davis, Iowa State's chief information officer, said the two high-powered computers have different capabilities and so the machines complement each other.

Here are two examples of what Lightning can do:

Eric Cochran, an assistant professor of chemical and biological engineering, is researching the properties of certain polymers characterized by self-assembly processes. It's work that could help create the next generation of computer chips. And it's work that requires studying features at the nanoscale, or at one billionth of a meter. One way to do that is to build complex 3-D computer simulations.

Before the new high-performance computer arrived on campus, Cochran said he had to work on computer clusters at the University of California, Santa Barbara, where he did his postdoctoral research. But now, "The facility here is orders of magnitude above and beyond what I was using," he said. "I now have everything I need for computing."

Francine Battaglia, an Iowa State associate professor of mechanical engineering and director of the Center for Building Energy Research, is working to understand chemical reactions as gases and solids flow together. She, for example, is studying the gasification of coal or switchgrass to see how they could be burned more efficiently.

Computer simulations for her research can take weeks or even a month to solve, Battaglia said. She estimated the new high-performance computer can handle the same calculations in about half the time. That not only makes her research more productive, it gives her the ability to solve bigger problems. She said the result is more accurate solutions.

"The machine is so fast that a month of calculations can be done in less than two hours. To successfully compete for research grants and to perform the research required for existing research grants, computational faculty must have access to these very fast machines."

Glenn Luecke, the director of Iowa State's High Performance Computing Partnership and a professor of mathematics