This is the second straight year the ISU team has taken a top prize in the competition, which included teams from 28 colleges from the United States and Canada. 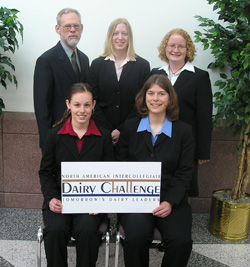 "It's a testament to our program," said Lee Kilmer, coach of the Dairy Challenge team and professor of animal science. "We've got a real strong science base, and we work well as a team."

"We've got some pretty sharp students," said Kilmer. "We just try to stay out of their way and they don't run over us too quickly."

The competition was devised to allow every aspect of dairy farm operation to be tested.

Each team toured a working dairy farm, but was not allowed to ask questions during the tour. Following the tour, there was a closely timed period for specific questions from the students. Then, each team of four prepared a presentation for the judges that addressed all aspects of the farm operation. ISU was one of four, first-place finishers - one for each of the four herds analyzed.

"This competition was a good way to apply all the knowledge we've learned," said McDowell. "We really build on what we learned in class and use it in a hands-on setting."

In addition to winning first place, the ISU team left quite an impression on the judges. According to Kilmer, the judges told the ISU team that they knew their way around a dairy barn better than any other team in the competition.

"When you've got some sharp students and they get along well and interact well with each other and each take leadership in different areas, and they are all enough versed to critique each other's comments and conclusions you've got a dang good program," said Kilmer.

And it helps when the students have so much respect for the cows.

"The dairy cows are like the Olympic athletes of livestock," said McDowell. "They are the real performers. They produce, they are pregnant. It's impressive how well they do."

"It's a testament to our program. We've got a real strong science base, and we work well as a team."