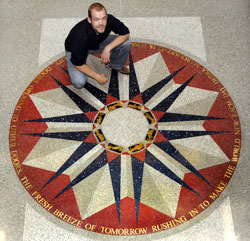 AMES, Iowa -- Many design students want to have their creations hung on a wall for everyone to see.

That's not how it worked out for senior Greg Wohlwend from Bettendorf - his work is on the floor, and he couldn't be happier about it.

That's because the work of this graphic design major is in the entrance of the south addition to the Memorial Union on the Iowa State University campus.

The art work represents the eight colleges on campus and was inspired by and created to look similar to the zodiac motif in the floor of the building's north entrance to Gold Star Hall, according to Kathy Svec, marketing director of the Memorial Union. The new design is on a north-south longitude that puts it directly opposite the zodiac.

Wohlwend thinks his work has a different goal than the 70-year-old zodiac.

"It's more about the colleges than the zodiac signs are," he said. "That's what I want to students to take away from it."

Wohlwend's designs are cast in bronze and form the center of a large eight-point compass in the floor. Around the edge of the circle is a line from a poem by Debra Marquart, an associate professor in English.

For the designs, Wohlwend stressed the academic areas and what students are learning.

"The idea was to put the learning tools from each college into each design," he said.

That involved lots of brainstorming with other members of the Memorial Union's graphic design staff where Wohlwend works. The colleges - Agriculture and Life Sciences, Business, Design, Engineering, Graduate, Human Sciences, Liberal Arts and Sciences and Veterinary Medicine - were also asked to provide concepts and images to inspire the design process.

After considering the College of Engineering, Wohlwend decided that a bridge would be a focal point of that college's design. He also used many other symbols from other types of engineering.

The symbols also had to be a somewhat timeless representation of that discipline, such as the steel plow and modern tractor in the College of Agriculture's design.

Wohlwend, a 2002 graduate of Pleasant Valley High School who hopes to pursue a career designing video games, says students shouldn't fear stepping on his design. Myth suggests that stepping on the zodiac will insure students will flunk their next test.

Greg Wohlwend's art is in the entrance of the south addition to the Memorial Union on the Iowa State University campus.

"The idea was to put the learning tools from each college into each design."