AMES, Iowa -- Iowa State University will celebrate its 150th anniversary at its Iowa State Fair exhibit during the 11-day event.

This year's fair is themed "Sounds Like Fun!" and runs from Aug. 9 through 19 at the Iowa State Fairgrounds.

Every year Iowa State University has an exhibit at the fair where visitors can get temporary tattoos, football schedule posters, admissions applications and information about the university. And this year's display also features a historical look at the institution's 150 years of serving Iowans.

Visitors to the exhibit can see a 21-foot color timeline that will illustrate "Celebrating 150 Years of Adventurous Minds." The two-sided display will be part of the ISU exhibit in the northeast corner of the Varied Industries Building, open from 9 a.m. to 9 p.m. daily during the fair.

"We will have artifacts loaned from various departments on campus that have a significant place in our history," Custer said. "These are historical items that many people don't get a chance to see."

Eight displays will showcase items that range from the scientific to the odd. One display will feature Cyclone head wrestling coach Cael Sanderson's accomplishments, including his Olympic gold medal. Another will spotlight the original memory drum of John Atanasoff's ABC computer that was on display at the Smithsonian Institute.

The past is not the only part of Iowa State's fair exhibit. Custer said the future will be highlighted in a 10-foot display, "The 150-Year Adventure Continues."

"We will spotlight some of the research the university is undertaking that has major significance in addressing some of the world's greatest challenges," Custer said.

This glimpse of ISU's research includes work in biofuels and renewables, bioterrorism, alternative uses for crops and cancer treatments.

Daily drawings will be held for prizes that include sesquicentennial T-shirts, Cyclone football tickets, and Iowa State Center performances. ISU's mascot, Cy, will make appearances Aug. 10 (10 a.m.) and Aug. 17 (2 p.m.). The sesquicentennial commemorative art mural, "What We Love About Iowa State University," created by Sticks Inc. also will be on display.

"Iowa State has been serving this state for 150 years and the citizens of Iowa can be proud of what this university has contributed," Custer said. "This is our way of sharing with the public some of our historic accomplishments and what the future impact of the university will be."

The Iowa State Fair is also helping ISU celebrate its 150th birthday by organizing a pair of quilting contests with the sesquicentennial theme. Both contests were open to Iowa residents, as well as out-of-state ISU graduates.

Entries in the quilt block contest will be assembled into a quilt that will be auctioned at the end of the fair. This quilt will be displayed on the south side of the Varied Industries Building, along with entries in a special category: bed-sized/wall quilt using the ISU sesquicentennial theme.

ISU Extension's exhibit will be in the air-conditioned 4-H Exhibits Building and will focus on its programs and history. The building also is home to a variety of 4-H department displays and thousands of 4-H exhibits.

Elaine Edwards, Extension communications manager, said a selection of historical photos will be on display as part of a caption contest. Visitors can submit balloon captions for the photos.

ISU's College of Veterinary Medicine is partnering with the Iowa State Fair and the Iowa Veterinary Medical Association on a birthing center project in the just-opened Animal Learning Center located near the "Little Hands on the Farm" exhibit on the north end of the fairgrounds.

The air-conditioned building will showcase the livestock birthing process with cattle, swine, sheep, chicken and ducks bred to have offspring during the fair. A number of presentations will take place throughout the fair in the stage area of the building.

The College of Veterinary Medicine is providing the cattle for the display, and veterinary students and at least one faculty member will be on hand to help with the program.

"We anticipate that we'll have 4,000 people go by," said Jim West, director of ISU's Food Supply Veterinary Services. "The chance to have that number of people see agriculture at its best and veterinary medicine at its best; we think it's cool." 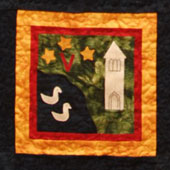 The celebration of ISU's 150th carries up to the second floor of the Varied Industries Building, where visitors will find quilts created for two ISU sesquicentennial contests. 150th quilt contests.

"Iowa State has been serving this state for 150 years and the citizens of Iowa can be proud of what this university has contributed. This is our way of sharing with the public some of our historic accomplishments and what the future impact of the university will be."