AMES, Iowa -- Chimpanzees in Senegal are regularly making and using spears to hunt other primates -- without human assistance -- according to research led by an Iowa State University anthropologist. That study, funded by the National Geographic Society, is the first to report habitual tool use by non-humans while hunting other vertebrates.

ISU Assistant Professor of Anthropology Jill Pruetz and Paco Bertolani -- a graduate student with the Leverhulme Centre for Human Evolutionary Studies, Department of Biological Anthropology at the University of Cambridge in England -- documented 22 cases of the chimps fashioning tools to use in hunting smaller primates in cavities of hollow branches or tree trunks. They made the discovery at their research site in Fongoli, Senegal between March 2005 and July 2006.

A paper on the study, authored by Pruetz and Bertolani and titled "Savanna chimpanzees (Pan troglodytes verus) hunt with tools," will be published in the March 6 edition of "Current Biology." The article will be available online in the professional journal on Thursday, Feb. 22.

"We came upon the discovery quite unexpectedly," said Pruetz. "There were hints that this behavior might occur, but it was one time at a different site. Then I talked to my project manager (Bertolani) and he told me that he saw a female hunt with tools. When he looked through original data that was collected, we realized he had other evidence and observations of them probably doing the same thing. While in Senegal for the spring semester, I saw about 13 different hunting bouts. So it really is habitual."

Chimpanzees forcibly jabbed tools into hollow trunks or branches multiple times and smelled and/or licked them upon extraction. Only two of the 22 reported cases were seen as playful -- in the case of an infant male -- or exploratory in nature. In all other cases, chimps were judged by the researchers to use such force in inserting the tool that prey within the tree could have been injured. They witnessed just one case in which a chimpanzee extracted a bushbaby -- a smaller primate -- through use of the spear.

"In the chimp literature, there is a lot of discussion about hunting by adult males, because basically, they're the only ones that do it -- and they don't use tools," said Pruetz. "Females are rarely involved. And so this was just kind of astounding on a number of different levels. It's not only chimps hunting with tools, but females -- and the ones who hunted the most with them were adolescent females.

"It's classic in primates that when there is a new innovation, particularly in terms of tool use, the younger generations pick it up very quickly. The last ones to pick up are adults, mainly the males," she said. "This is because immatures learn from the ones they are most affiliated with, their mothers."

They authors conclude that these findings support a theory that females might have played a role in the evolution of tool technology among the earliest humans. Those technologies included hunting-related behavior, in addition to gathering-related activities.

"The combination of hunting and tool use at Fongoli, behaviors long considered hallmarks of our own species, makes the population especially intriguing," they wrote. "The observation that individuals hunting with tools include females and immature chimpanzees suggests that we should rethink traditional explanations for the evolution of such behavior in our own lineage. Learning more about the unique behaviors of chimpanzees in such an environment, before they disappear, can provide important clues about the challenges facing our earliest ancestors."

In order to make their observations, Pruetz and her team spent four years "habituating" the chimpanzees -- familiarizing them with humans -- over their 63-square-kilometer Fongoli study site. That process has changed over the years.

"You have to spend hours and hours attempting to follow them and keeping up with them and basically getting them used to you so they think you're just a benign presence," Pruetz said. "What researchers used to do once upon a time was to feed the chimps bananas, which got them used to humans very quickly. But this method causes problems. We know nowadays that there are a lot of diseases that can be passed from chimps to people and visa-versa. There are also ethical problems because the chimps at some sites got over-habituated to where they weren't fearful of humans and could cause harm to people."

The research during the study period was supported by grants from the National Geographic Society, Center for the Study of Violence at Iowa State University, ISU Foreign Travel Grant, ISU Faculty Professional Development Grant, and the American Society of Primatologists Conservation Grant.

Pruetz will be presenting the College of Liberal Arts and Sciences Dean's Lecture Series Talk on Wednesday, March 7, at 8 p.m. in the Sun Room of ISU's Memorial Union. Her free public lecture is titled "Life in the Savanna." The lecture series is funded by the University Committee on Lectures, through the Government of the Student Body. More information. 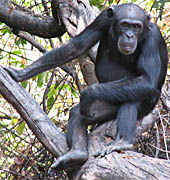 Tia is a chimp at the Fongoli site. Photo by Maja Gasperic.

"In the chimp literature, there is a lot of discussion about hunting by adult males, because basically, they're the only ones that do it -- and they don't use tools. Females are rarely involved. And so this was just kind of astounding on a number of different levels. It's not only chimps hunting with tools, but females -- and the ones who hunted the most with them were adolescent females."