The grants were awarded to faculty researchers in eight university departments through a competitive program designed to stimulate excellence in plant science research. Grant amounts range between $30,000 and $60,000 for two years.

"These research projects bring additional firepower to our research initiatives," Howell said. "They are excellent projects that promise to advance the scientific foundation for future developments in crop technology."

Howell also noted that several of the projects will be conducted in partnership with other campus units, such as the U.S. Department of Energy's Ames Laboratory and ISU's Department of Materials Science and Engineering and Department of Biophysics, Biochemistry and Molecular Biology.

Research began in July on the projects described below.

Growing engineered crops that express Bt genes has become a major strategy for caterpillar pest control. Aphids, which are not sensitive to any known Bt proteins, have replaced caterpillars as the primary pests on many crops. Aphids cause major economic losses on almost all crops, and current management relies primarily on potentially harmful chemical insecticides. Bt proteins are not effective against aphids because Bt proteins lack a domain that binds to the aphid midgut, a critical step in the sequence of events that results in Bt toxicity. Huarong Li, a researcher in entomology, will construct a Bt toxin active against aphids. He will provide a site in the Bt protein molecule that specifically binds to aphid midgut membrane. If successful, the potential impact of this technology would be considerable. For example, a soybean aphid invasion in Iowa could require spraying about three million acres and cause losses of more than 55 million bushels, resulting in an economic impact of more $250 million in an outbreak year, according to an article in the June 2005 Integrated Pest Management by ISU entomologists Carol Pilcher and Marlin Rice, and extension specialist Todd Vagts.

High-throughput techniques for gene discovery and expression analysis, such as whole genome sequencing and microarrays, have uncovered thousands of new genes with no known function. The findings demand large-scale and efficient procedures to assign genes their biological function. Reverse genetics is the process used to study gene function in which researchers examine the consequence of inactivating a specific gene. Bing Yang, assistant professor of genetics, development and cell biology, will develop a reverse genetics approach called virus-induced gene silencing. The studies will be conducted in rice to develop the genetic tools for application to other crops, including corn and sorghum.

Dedicated bioenergy crops offer new opportunities as feedstocks for biofuel production. Emily Smith, assistant professor of chemistry, will develop a new way to evaluate various crop plants for their capacity for ethanol production. She will use Raman imaging to probe plant cell wall structure, assessing lignin, hemicellulose and cellulose content of potential biofuel plant stocks such as switchgrass, Miscanthus, poplar, corn and willow. Raman imaging technology uses an optical microscope with laser beams illuminating specimens, while scattering some of the light. By analyzing the scattered light with a spectrometer, she can quickly acquire information used to determine the chemical makeup of the plant material. Her goal is to improve ethanol yields per acre of biomass by correlating plant composition and cell wall degradation with ethanol conversion efficiency. The U.S. Department of Energy's Ames Laboratory also has provided funding for this research.

Automobile tires are made from a synthetic rubber that uses petroleum-based fillers to improve mechanical integrity and durability. Not only does their composition rely on a diminishing fossil fuel, but their disposal also has a negative impact on the environment. Biobased polymers are becoming practical alternatives to petroleum-based plastics and are biodegradable, as well. Michael Kessler, assistant professor of materials science and engineering, will lead a research team to develop new biocomposites from soybean, corn and linseed oils reinforced with inexpensive and abundant ethanol co-products. These include distillers dried grains and solubles (from the dry mill process) and spent germ (from the wet mill process), corn stover, carbon black and/or clay nanoplatelets. These biobased rubber composites are expected to be an economical and environmentally friendly alternative to the rubber used in tires. The Department of Materials Science and Engineering also is contributing funding to this project.

The production in plants of so-called resistant starches is one method to counter the increased incidence of obesity and related diseases such as cancer and diabetes. These starches release sugar more slowly in the bloodstream and act more like dietary fiber. A research team led by Suzanne Hendrich, professor of food science and human nutrition, will identify and compare human intestinal bacteria in their ability to metabolize resistant starches. The microbes may convert some of the starches into beneficial products. These include butyrate, which may help prevent colon cancer, and propionate, which may help lower cholesterol. The researchers will identify key intestinal microbes that cause butyrate and propionate formation and see which starches are best for producing these substances.

Many plant scientists aspire to produce in valued-added products in plants, such as biopharmaceuticals. Most examples of biopharmaceutical production in plants involve the expression of novel proteins or therapeutic compounds in seeds or fruit. For these organs to produce sufficient amounts of biopharmaceuticals, they have to remain attached to the plant. Robert Thornburg, professor of biophysics, biochemistry and molecular biology, will look at ways plants maintain seeds and fruit on the stem. Thornburg will identify and characterize genes expressed during the natural process of shedding. The biophysics, biochemistry and molecular biology department is contributing to the funding of this project. 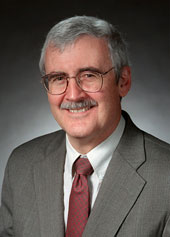 Six innovative research projects at Iowa State that are tackling scientific challenges facing Iowa agriculture recently received start-up funding from the Plant Sciences Institute. The projects relate to the institute's research initiatives in biopharmaceuticals, biorenewables, crop protection, genomics and nutrition. The grants were awarded to faculty in eight university departments through a competitive program designed to stimulate excellence in plant science research. Grant amounts range between $30,000 and $60,000 for two years. The research started in July.

They are excellent projects that promise to advance the scientific foundation for future developments in crop technology.