AMES, Iowa -- The increasing allure of the Web site www.secondlife.com is that it combines the interactivity of social networking with computer imagery found in today's video games -- literally creating a "second life" 3D virtual world for its more than 5 million users.

But thanks to Linden Lab® in San Francisco, creator of Second Life®, this virtual world contains real world business commerce for online entrepreneurs -- with transactions of nearly $2 million occurring daily. That's why an Iowa State University management information systems professor identified it as an ideal teaching tool for students in his electronic commerce strategy course.

Associate Professor and Deans Faculty Fellow in Management Information Systems Brian Mennecke had students in his MIS 434 class set up free Second Life accounts in order to assess potential entrepreneurial opportunities within the virtual world. He then asked them to develop business models for their fictional businesses.

"Second Life is trying to simulate the real world, so you get all the facets of the real world," said Mennecke. "You get the breadth of human activity. It presents opportunity for people to make money.

"We asked the students to figure out how to make money through Second Life," he said. "So just like real world business, they would recognize an opportunity, come up with an idea, and build a model on how they would plan to act on that idea. They could run it like others in e-commerce -- like running an eBay business."

Some corporations -- like Adidas and BMW -- are already doing business through Second Life. There are also banks, casinos, and individuals who serve as virtual realtors -- selling island space for users to call their own.

For his class project, ISU senior Salman Abid of West Des Moines, Iowa, proposed creating a consulting company that would assist other businesses in creating a Second Life presence. Josh Dieter -- another MIS senior from Nevada, Iowa -- worked with three classmates to propose an in-game banking/investment firm, Second Life Investments. The students noticed that few individuals and/or organizations were taking advantage of their balance of currency in Second Life, and their proposed bank would allow users to earn interest on their Linden dollars -- much like a traditional real-world bank.

"I really enjoyed this project," he said. "I enjoyed being able to take what was taught in class and apply it in a hands-on and fun environment. I think that I was better able to understand many of the concepts better after working through them in SL, not only because I was applying the concepts rather than reading them, but I also had the chance to choose how I wanted to approach this project.

"Second Life is new and still evolving," said Dieter. "I think the issues that have been brought up around the game such as tax implications, virtual governments and stock market, new business outlets and ideas, etc., could make Second Life more enjoyable than other social networking sites, like Facebook. Those sites tend to limit the content to a Web page, but in Second Life, you can fill up a virtual house with aspects of your personality, and it is interactive. The possibilities with SL are what interest me most."

In doing research within Second Life, Dieter spoke with another banker who was planning to establish his own Linden Stock Exchange within the game.

Second Life not a perfect world

But Dieter's team reported that the virtual world of Second Life also has its flaws -- the biggest being computer lag time, particularly when a large number of users were logged onto the system; and searches for regular items often coming back laden with adult content and questionable material.

Mennecke admits that the content found on Second Life can be problematic. However, he considers it to be a further reflection of its "real world" properties.

"It still offers a no-harm environment within which you can observe business," he said. "You see the same behaviors that are manifestations of the real world."

While he enjoys Second Life's real world simulation, Mennecke emphasizes to students that his course is about e-commerce -- not Second Life. But because of the interconnectivity between Second Life users, he is planning to teach another electronic commerce course for ISU's Engineering Distance Education (EDE) in Second Life this summer. Mark Strosahl -- a junior management major from Mitchellville, Iowa who works for EDE -- built a video trailer for this summer's course at http://www.ede.iastate.edu/CourseInfo.asp?id=1277, and has also compiled a Second Life tutorial for students. EDE has purchased an "island" in Second Life.

"We hope to use the space for educational/research opportunity to not just the College of Engineering, but open up to other colleges as well," said Hiro Iino, program coordinator of ISU's Engineering Distance Education program. "We hope to have an active island for ISU."

Mennecke said that he will be teaching the summer course to real students, even though they will appear as avatars -- their digital persona in the virtual world -- through Second Life. He reports that a growing number of institutions are now offering courses through this growing online community. 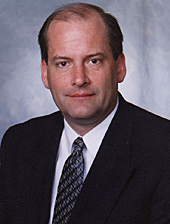 Associate Professor and Deans Faculty Fellow in Management Information Systems Brian Mennecke has been using Second Life® -- the 3D virtual world for its more than 5 million users created by Linden Lab® -- as a teaching tool. Mennecke is planning to teach an electronic commerce course for ISU's Engineering Distance Education (EDE) in Second Life this summer. A trailer for this summer's course is available here.

"Second Life is trying to simulate the real world, so you get all the facets of the real world. You get the breadth of human activity. It presents opportunity for people to make money."