AMES, Iowa -- The founder, president and CEO of the Federal Express Corp., Frederick Smith, will present the sixth annual Manatt-Phelps Lecture in Political Science at Iowa State University. He will speak on "Trends and Issues in the World Marketplace" at 8 p.m. on Tuesday, Dec. 4, in the Sun Room, Memorial Union. The lecture is free and open to the public.

Upon being inducted into the American Academy of Achievement in 1998, Smith was called the "father of the overnight delivery business" in his biography on the academy's Web site (link here). He started his express transport business after leaving the service in 1971, raising $80 million to launch Federal Express. On the first night of operations, a fleet of 14 jets took off with 186 packages.

But in the first two years of operation, the venture lost $27 million. It appeared as if the company was on the verge of bankruptcy, and that Smith had lost all of his investors' money, including the capital of his own brothers and sisters. But he succeeded in renegotiating his bank loans and was able to keep the company afloat.

"We'd run out of money and we didn't have all of the regulatory requirements that we needed," Smith said on the American Academy of Achievement Web site. "My half-sisters were up in arms because it looked like we were going to lose some money. Everything was going wrong, except the fundamentals of the business were proving every single day that the idea was right."

That same year, Smith acquired the $2.7 billion Caliber System, whose trucking subsidiary RPS ranked second in ground shipments, exceeded only by the United Parcel Service (UPS). The RPS fleet of 13,500 trucks increased FedEx's profit margin because ground fleets are cheaper to operate than airplanes. It also presented FedEx opportunity when UPS was immobilized by a strike later that year. When the strike was over, FedEx had pulled roughly two percentage points of market share away from UPS -- increasing its share of the express transportation market to more than 43 percent.

Smith is a graduate of Yale University, where one of his professors found the premise improbable for a paper he wrote on the need for reliable overnight delivery in a computerized information age. He also served two tours of duty in Vietnam in the Marine Corps.

Thomas and Elizabeth Phelps and Charles and Kathleen Manatt established the annual Manatt-Phelps Lecture in Political Science. The annual fall lectures focus on significant developments in international political economy during the previous year, and how the issues affect and are affected by Iowa.

The event is also sponsored by ISU's College of Liberal Arts and Sciences and Committee on Lectures. 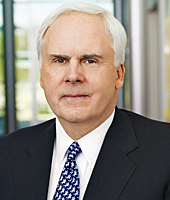 The founder, president and CEO of the Federal Express Corp., Frederick Smith, will present the sixth annual Manatt-Phelps Lecture in Political Science at ISU. He will speak on "Trends and Issues in the World Marketplace" at 8 p.m. on Tuesday, Dec. 4, in the Sun Room, Memorial Union.