AMES, Iowa -- While community colleges have increasingly become a higher education option for students because of their affordability and accessibility, an Iowa State University education professor warns that they face a serious leadership problem by 2010.

Larry Ebbers, University Professor of higher education in ISU's Department of Educational Leadership and Policy Studies, collaborated on a study of community college presidents which found that approximately half of those presidents will retire by 2010.

That's exactly why Ebbers and other faculty from ISU's Community College Leadership Program (CCLP) have organized the inaugural "Education Practice in Leadership: Transforming Community Colleges Conference" at the Westin Crown Center in Kansas City, Mo., Sunday through Tuesday, Oct. 28-30. Pre-conference sessions will begin at 2 p.m. on Sunday, with conference sessions starting at 10 a.m. on Monday and 8:30 a.m. on Tuesday.

"We know that half of community college presidents are going to retire within the next three years," Ebbers said. "Our role is to help prepare the next generation of leaders.

"Through this conference, we're trying to establish Iowa State as the institution in the Midwest that's responsible for community college leadership," he said. "There's really no other university in our region that has developed a community college leadership program like Iowa State has, and it's our goal that the program become recognized nationally."

Ebbers says the conference already has registered approximately 250 community college leaders from across the country -- including officials from all 15 Iowa community colleges, as well as a high percentage from the neighboring states of Illinois, Kansas, Minnesota, Missouri and Nebraska.

Some of those leaders are graduates of ISU's Leadership Institute for a New Century (LINC) and Community College Leadership Initiative Consortium (CLIC) programs, which Ebbers founded to provide leadership development for mid-and upper-level administrators in community colleges. Each group will hold reunions during the conference.

Sunday's pre-conference will feature sessions titled "The Model Entrepreneurial College," "Understanding and Managing Statewide Legislative Processes," "Hot Policy Issues Coming to a College Near You: Why You Need to Care," and Ebbers' session -- "Succession Planning and Growing Your Own Initiatives."

"We're going to look at how institutions can develop 'grow your own' leadership programs, where they develop their own programs in-house," he said. "That's really one of the new avenues for developing leadership is to grow your own kind of institutional program, in addition to statewide program like we have here in Iowa. Very few states are adding programs like we have now."

Ebbers cites Des Moines Area Community College as an example of a local institution that has developed its own three-year leadership program.

Organizers hope to publish presentations from the conference into a future volume on community college education practice and leadership.

Complete information on the conference is available on its Web site at http://www.cclp.hs.iastate.edu/conference07/homepage.html>.

Iowa State's Community College Leadership Program was cited by the 2006 "Leading forward Report" by the American Association of Community Colleges as being one of the new community college leadership programs that meet 21st-century needs. More information on the program is available through its Web site at http://www.cclp.hs.iastate.edu/homepage.html. 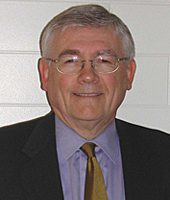