AMES, Iowa -- A university honors project has earned national honors for an Iowa State University senior. Grant Thompson won the Communications Honor Award in the American Society of Landscape Architects (ASLA) Student Competition for his Digital Art on Campus Project. The award was presented earlier this month at the ASLA annual meeting in San Francisco.

Thompson's innovative project blends Web-based streaming video and downloadable audio files into a digital tour of 17 pieces in Iowa State's celebrated collection of campus artwork. It can be used for a wireless walking tour on campus or a virtual visit from anywhere in the world. The Web site http://www.museums.iastate.edu/DAOC/home.html was launched in January 2007.

"The project explores how digital media can enhance the physical landscape," said Thompson. "Conventional signage is often inadequate to deliver the intentions, ideas or research represented in the built environment."

Tackling the outdated conventions of museum signage may seem an odd choice for a student who will earn two bachelor's degrees in landscape architecture and horticulture in December. But for Thompson it was a natural evolution. He grew up in museums.

Thompson is the son of Jerome Thompson, Des Moines, State Curator and former long-time director of the State Historical Society of Iowa. When Grant presented his project this month at the Iowa Museum Association annual conference, his father introduced him.

The idea for the project started to form in the summer of 2005. Thompson studied in Europe as part of the ISU College of Design's Rome Program.

"I was fortunate to visit a lot of museums in France and Italy," Thompson said. "I relied on acoustic guides so I could listen to an English translation."

The following semester, he participated in a landscape architecture project with the Coeur d'Alene Nation in Idaho. The class observed a tribal program that used GIS and video to produce educational materials. When they returned to ISU, Thompson led a group of classmates in the production of a DVD about their experience with the Coeur d'Alene. At the same time, Thompson was learning from a fellow student about wireless digital space as a form of communication.

"All these ideas coalesced and I thought about using the wireless Internet in the sense of a museum as an alternative way to deliver content," he said.

"In a museum, you have placards or other written signage. It's a stale environment. Hearing and seeing things is a more active mode of engagement," Thompson said. "People of my generation grew up with the Internet and are more used to seeing visual imagery or hearing sounds."

The need for interpretation is where my interest in developing alternative communication technologies comes into play," said Thompson, who wants to pursue a career as a landscape architect, working with sustainable technologies.

The project got under way in April 2006 with funding from the landscape architecture department and the Barbara King Scholarship for Innovation and Entrepreneurship.

Thompson worked with Allison Sheridan, University Museums program coordinator, researching each piece of art to create the video narration. Each narration is about five minutes long and presents basic information about the artist, how the art was made and the story behind it. For example, the video about Stephen DeStaebler's "The Left-Sided Angel," located outside the main entrance of the Parks Library, describes the sculpture and explains how the form of the angel represents the perseverance and determination of the human spirit.

Thompson also shot all of the photos and video, narrated most of the video, edited and mixed the audio and video, remixed the background audio, produced MP3 files, designed the Web site, and produced the graphic design for an accompanying DVD, poster and promotional materials. Some of the narration was provided by Molly Harris and the music was composed by Roy Abbot.

"This is an evolving field for museums," Thompson said. "Many museums incorporate either audio or a movie. And they're starting to look at the Internet and podcasts." 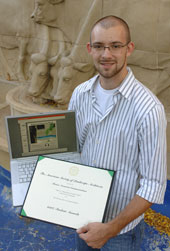 ISU senior Grant Thompson won a national award in the American Society of Landscape Architects Student Competition for his Digital Art on Campus Project. Thompson's innovative project blends Web-based streaming video and downloadable audio files into a digital tour of 17 pieces in Iowa State's celebrated collection of campus artwork. It can be used for a wireless walking tour on campus or a virtual visit from anywhere in the world. Website

The project explores how digital media can enhance the physical landscape. Conventional signage is often inadequate to deliver the intentions, ideas or research represented in the built environment.