AMES, Iowa -- Forget the April 22 Pennsylvania primary and its 188 delegates, or any of the 10 remaining primaries through June 3, for that matter. Since it seems unlikely that either Barack Obama or Hillary Clinton will achieve the 2,024 delegates needed to secure the Democratic nomination, the decision will ultimately fall upon the superdelegates -- or more accurately, "unpledged" delegates.

That's the name they were given on Feb. 27, 1983, according to the man who founded the idea -- U.S. Ambassador and former chair of the Democratic National Committee Charles Manatt, a 1958 Iowa State University graduate who will be back on campus Thursday through Saturday, April 10-12. He'll be one of the five recipients of an ISU Distinguished Alumni Award, which will be presented on Friday at 2:15 p.m. in Curtiss Hall Auditorium.

"I'm the father of the idea, and I don't call them superdelegates. That's a name the media's given them, but they're unpledged delegates," Manatt said. "The idea at the time was that some of the governors, senators and congressmen wouldn't come to the convention, so we arranged this system as a way to get them more involved."

Because the 793 prominent or "super" Democratic figures are unpledged, Manatt says the intent is not to simply reflect the popular vote or the delegate count through the primaries.

Manatt was elected chair of the Democratic National Committee in 1981. He also was co-chair of the successful Clinton-Gore presidential campaign, and in 1999 President Clinton appointed him U.S. Ambassador to the Dominican Republic.

Hillary Clinton is currently trailing Obama by approximately 130 delegates (1,635 to 1,503), and 48.5 percent to 47.1 percent (including Florida) in the popular vote, according to the Web site www.realclearpolitics.com. But that may not matter when it's time for the superdelegates to cast their vote.

"The Democratic Party wanted to have a checks and balance on the national vote -- almost like a House of Lords, if you will -- that the superdelegates were really to look more at the national interests and not really at the state and local interests," said Dianne Bystrom, director of the Carrie Chapman Catt Center for Women and Politics at Iowa State. "They're kind of a separate delegate house that is really to look more broadly and nationally, rather than locally, on making the best decision for the party.

"The problem is that we really never tried out the system," she said. "And so even though it's been around for more than 20 years, it hasn't really kicked into gear."

And there have been recent calls to get that system in gear -- sooner rather than later -- or have Clinton step aside to prevent further division within the party heading into the general election against Republican John McCain. But Manatt -- who remains unpledged, yet committed to Clinton -- doesn't buy that argument.

Making the decision before the convention

The 2008 Democratic National Convention will be held in Denver, Aug. 25-28. But the verdict by the superdelegates should come before that.

"They've got to do it (superdelegate decision) without doing it at the convention," said University Professor of Political Science Steffen Schmidt. "They've got to do it without having it (the debate over the nominee) being public. They've got to somehow try and do it behind the scenes, but the problem is there are no party heavyweights anymore who used to be able to grab these people, sit them down, and say, 'Look, for the good of the party, this is what we want you to do.' They're going to try and do it after the last primary is over, and they're going to say, 'Let's talk here, because we're going to be dead in November unless we can solve this.'"

And for those who believe the nomination should be decided before then, Bystrom has a solution.

"If voters really want this to end, then they'll go out and vote for Obama on April 22 (in Pennsylvania)," she said. "That could put an end to this, but I don't think that's going to happen. The voters in Pennsylvania and the other states with primaries in May and June seem to want this race to go on and to have a voice in the Democratic nomination process."

Clinton currently leads in most of the Pennsylvania polls. 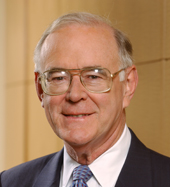 U.S. Ambassador and former chair of the Democratic National Committee Charles Manatt originated the idea for the party's current superdelegate system back in 1983. Manatt is a 1958 ISU graduate who will be back on campus Thursday through Saturday, April 10-12. He'll be one of the five recipients of an ISU Distinguished Alumni Award, which will be presented on Friday at 2:15 p.m. in Curtiss Hall Auditorium.