Eggshells are small pleasures in 243 diverse collages by ISU artist

AMES, Iowa -- As Ingrid Lilligren walks along her studio wall, she points randomly to one, then another of the collages that hang there, recalling the source of inspiration for each.

"This is an old velvet chair in a museum in Paris ... This is stack of clean T-shirts ... This one is a lily in a bouquet ... This was flying into a Los Angeles sunset during last fall's fires ... This refers to political upheaval in the Republic of Georgia ..."

The Iowa State University art and design professor is discussing the 243 "Small Pleasures" made from eggshells and dry pastels between Jan. 1 and Dec. 31, 2007.

The collages are the same size, created with the same materials and follow the same structure.

Yet they are as diverse as the colors of life.

Lilligren conceived of the project as a way to give herself "a job" for a year.

"As an artist, I challenge myself," she said. "I give myself problems to work with by limiting the size, the material. I gave myself the opportunity to see how far I could take this project--how creative I could get."

Like a scientist defining the variables of an experiment, Lilligren set up her challenge: She would work only on seven-by-seven-inch collages created with eggshells and dry pastels.

She would exercise her "art muscles" by working in the studio every day.

"Artists go through periods where it's hard to work for a number of reasons. So you don't go to the studio and it gets harder and harder the longer you stay away from it," she said

"I think it''s my responsibility professionally to my career as a teacher that I work in the studio every day," she said.

Lilligren, who works mostly in ceramic sculpture, had saved eggshells for seven years. At first, she saved only green shells because she was intrigued by the color. Then she became more inclusive, saving all colors-- khaki, grayish-pink, grayish-green and reddish-browns.

"There are not many who use the color of the shell as an art tool," she said.

"There are those who carve or stack or paint eggs. They want to retain the information that it's an egg, it's fragile and beautiful," she said. "I certainly appreciate that about the shells, but I'm much more interested in the color and the underlying idea of setting limits."

Each collage has a circle in the center of a colored background. The eggshells inside the circle are crushed or cracked in an infinite number of shapes and sizes, then glued ever so carefully. For the first 48 collages, Lilligren used only a single color in the circle and a single color in the background. Then she began to divide the circles and play with shapes to create a composition in the circle. And her references became more abstract and philosophical as the project progressed.

As soon as she completed a collage, she emailed a digital image of it to some 90 friends, along with an artist's diary of sorts, referencing the inspiration of that piece.

Lilligren saved all of the many responses she received.

"Some write everyday, others write in response to a particular piece," she said. "It's been great to be connected to my friends every day."

Lilligren is donating the proceeds of sales to Ames organizations that help people who don't have enough to eat.

"And that's the only literal connection I'll make to the egg," she said.

Some collages are traveling to the Huntington Beach Art Center, Calif., March 7-April 13, for an exhibition in conjunction with a show, "Obsessive/Compulsive." And some pieces will be included in Lilligren's solo show, May 31-July 20, at the Xiem Clay Center, Pasadena, Calif.

Exercising her "art" muscles by working in the studio daily during 2007, Art and Design Professor Ingrid Lilligren created 243 collages, using eggshells and dry pastels, and emailed the images to 90 of her closest friends. Although identical in size and structure, the "Small Pleasures" are as diverse as the colors of life. They will be exhibited and sold Feb. 9-14 at Lilligren's studio in downtown Ames. All proceeds go to local organizations that help people who don't have enough to eat.

"There are not many who use the color of the shell as an art tool." 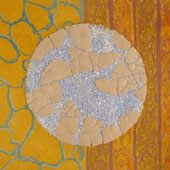 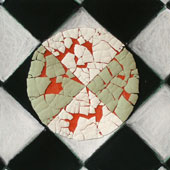 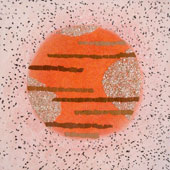 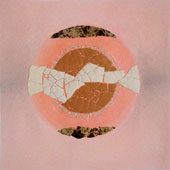