It could have been another six or seven laps if there wasn't a joint failure in the steering mechanism. A couple of flat tires slowed the team, too.

Even so, the performance was good enough for a 10th place finish in the endurance event at this spring's competition for mini Baja racers sponsored by SAE, the Society of Automotive Engineers. The May 28-31 competition attracted 94 university teams to Caterpillar's Edwards Demonstration Facility near P eoria, Ill.

The endurance race was the best event for Iowa State's Mini Baja Team. And that's a good thing. The long race is worth 40 percent of a team's score. That solid finish pushed Iowa State up to 16th overall in the annual competition. That's way up from last year's 87th place finish. And it's been at least twelve years since the team has posted a top 20 finish.

"We were really thrilled to death with our finish this year," said Shane Pearson, a senior from Spencer who's studying mechanical engineering and is the project director for Iowa State's team.

But the student-engineers had to earn that finish with some quick problem-solving.

It turns out they built a rear suspension with so much up-and-down travel that it broke the joints connecting the axle to the transmission. Their solution was to limit the suspension travel.

Then a joint in the steering broke. And then it broke again at the beginning of the endurance race.

Pearson said the team miscalculated the forces the steering hardware would have to take. Their solution was to go out and find a bigger and stronger universal joint.

Both solutions worked and Iowa State's Baja racer was competitive when it counted most.

"Things went as we hoped," Pearson said. "We couldn't have asked for a lot more." 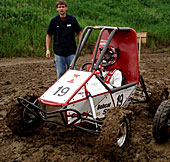 There were challenges with a muddy track and some equipment failures, but Iowa State's Mini Baja Team raced to a 16th place finish at a recent Baja SAE competition sponsored by the Society of Automotive Engineers. The team's best event was the competition's biggest, a four-hour endurance race.

"We were really thrilled to death with our finish this year."

Shane Pearson, a senior from Spencer who's studying mechanical engineering and is the project director for Iowa State's Mini Baja Team

These students -- all of them majoring in mechanical engineering -- worked to design and build Iowa State's Baja race car: