AMES, Iowa -- With news that Hillary Clinton plans to end her bid for the Democratic presidential nomination and endorse Barack Obama by the end of this week, so ends one of the most storied and contentious presidential primaries in the country's history.

"Never in recent history has the nomination process for a major American political party been so evenly divided until the finish line," said Steffen Schmidt, University Professor of political science at Iowa State University and lead author of the country's most widely adopted introductory college textbook, "American Government and Politics Today" (17th Edition, Wadsworth Publishing). "Never in American history has a primary been so divisive, not just between the personalities of the two major candidates -- Obama and Clinton -- but also so deeply divisive by creating a racial, gender and generational divide."

But now that the smoke is settling from the heated primary, questions abound on Clinton's political future and Obama's chances in the fall general election.

The main question for Clinton is "What does she want?" After a close runner-up finish that earned her nearly 18 million votes and amassed 1,921 delegates -- presently 260 shy of Obama, according to www.realclearpolitics.com -- she still wields much power as far as the party's chances in November. Some political analysts say she wants the vice presidential spot on the Obama ticket. Others say it's a high-ranking position in his cabinet, or an appointment to the Supreme Court. But Dianne Bystrom, director of the Carrie Chapman Catt Center for Women and Politics at Iowa State, says it may not be something that formal.

"I'm not so sure that she wants anything more than a platform for some of her ideas that she campaigned on," said Bystrom, who has authored a chapter for a forthcoming book on the Clinton campaign -- one of 13 books on politics she's co-authored. "Does she want a Supreme Court nomination or a cabinet position? I'm not so sure she doesn't want to just come back to continue her work in the Senate.

"She finished with 49 percent of delegate support in the primary, and if you look at the popular vote, it was even stronger," she said. "She can use that support to help give her a voice in building the Democratic platform for some of her positions that she feels the strongest about -- like health care. The only position she might be interested in is becoming a justice to the Supreme Court, but Presidents typically appoint younger people to the court."

And Obama has identified with youth -- drawing much of his support from young people during the primary. Schmidt said "Barack Obama has clearly run as the candidate of youth, the future and of change."

But while Obama's charismatic "flash" gained him "rock star" status among young people on campaign stops, it was the substance of his campaign strategy that ultimately doomed Clinton.

"You have to give credit to the Obama campaign. It was a better run campaign," Bystrom said. "It was a campaign that knew the primary system and ran the campaign based on that, yet did things in an unorthodox fashion that worked.

But instead, it was Obama who branded his campaign with the word "Change." Yet it appears as if he'll have to contend with Republican nominee John McCain for ownership of the word this fall.

"Sen. McCain must try to walk a very fine line between pleasing Republicans who still support President Bush and the majority of voters who are very unhappy with most of the results of the eight years of Bush -- the war in Iraq, the economy, oil prices, budget deficits, and government incompetence in emergencies such as Katrina," Schmidt said. "Only 28 percent of Americans approve of President Bush. McCain must prove that he is not Bush and that he can better end the war in Iraq as well as convince voters that he represents change. McCain recently spoke in Louisiana and the word 'change' was used by him in almost every sentence."

The candidate who can appeal best to voters' desire for change may be the next president, particularly with each candidate claiming the lead according to the latest national polls by Gallup and CBS News respectively. 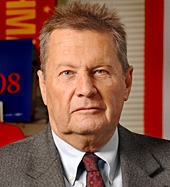 Now that it appears as if the long and contentious Democratic presidential primary is over, ISU political scientists Dianne Bystrom and Steffen Schmidt discuss Hillary Clinton's political future and Barack Obama's chances in the fall general election.