AMES, Iowa -- In response to the assassination of Martin Luther King, Jr. in 1968, teacher Jane Elliott devised the controversial and startling Blue Eyes/Brown Eyes exercise for her Riceville, Iowa, classroom. The well-known exercise labeled participants as inferior or superior based solely upon the color of their eyes and exposed them to the experience of being a minority.

Elliott will lead a three-hour, interactive workshop that will allow participants to better understand the anatomy of prejudice at 7 p.m., Thursday, March 27 in the Memorial Union Sun Room at Iowa State University. "The Anatomy of Prejudice" is free and open to the public.

Elliott's Blue Eyes/Brown Eyes exercise was the subject of the Peabody Award-winning documentary, "The Eye of the Storm," and a follow-up PBS/Frontline production, "A Class Divided." During her presentation, Elliott will show clips, discuss the film and explore with the audience the problems of racism, sexism, ageism, homophobia and ethnocentrism, and ways to eliminate them.

An internationally known teacher, lecturer and diversity trainer, Elliott is the recipient of the National Mental Health Association Award for Excellence in Education.

Elliott's presentation is presented by the Black Graduate Student Association, Margaret Sloss Women's Center, Multicultural Student Programming Advisory Council, the Department of Psychology, SUB Awareness, University Extension and the Committee on Lectures, which is funded by the Government of the Student Body. 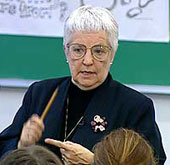 A three-hour, interactive workshop with diversity trainer Jane Elliott, creator of the Brown Eyes/Blue Eyes bigotry exercise, featured in a documentary and a PBS/Frontiline program.