AMES, Iowa -- Ratnesh Kumar keeps his prototype soil sensors buried in a box under his desk. He hopes that one day farmers will be burying the devices under their crops.

Kumar is leading an Iowa State University research team that's developing transceivers and sensors designed to collect and send data about soil moisture within a field. Eventually the researchers are hoping the sensors will also collect data about soil temperature and nutrient content. 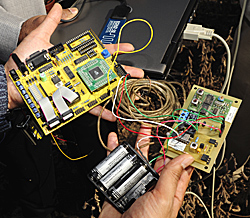 Wireless soil sensors will be tested in a research field later this fall. Photo by Bob Elbert.

A major goal is to build small sensors (the prototypes are about 2 inches wide, 4 inches long and less than an inch thick) that can do their work entirely underground. The sensors won't need wires or above-ground antennas, so farmers could work right over the top of them. The sensors would also be able to report their locations. That would make it easy to find sensors if a plow were to move them or when batteries need to be replaced.

Kumar, an Iowa State professor of electrical and computer engineering, said the sensors are designed to be buried about a foot deep in a grid pattern 80 to 160 feet apart. The sensors would relay data along the grid to a central computer that would record information for researchers or farmers.

And those sensors could help farmers manage their nutrient and water resources. That could maximize yields and profits. And it could minimize environmental impacts.

"If nutrients are in excess of what's needed, it doesn't help the yield," Kumar said. "Those resources just drain into the environment."

Stuart Birrell, an Iowa State associate professor of agricultural and biosystems engineering and a part of the sensor research team, said the project will provide the kind of real-time, high-resolution data that researchers and producers have been looking for.

"A challenge of precision agriculture is collecting data at a high enough resolution that you can make good decisions," Birrell said. "These sensors would provide very high resolution data for producers and researchers. They would give us another data layer to explain differences in yield and help us make management decisions."

Kumar said the sensors have worked underground in preliminary, point-to-point tests. A network of multiple sensors will be buried in a research field later this fall for more testing and development.

The project is supported by a three-year, $239,999 grant from the National Science Foundation .

"The goal is to hopefully have these sensors in production agriculture," Kumar said. "But first we need to develop them and answer more questions about how cost-effective they could be."

Iowa State University researchers are developing wireless soil sensors that could one day help farmers maximize their production while minimizing environmental impacts. The prototype sensors are designed to collect and send data about soil moisture -- and eventually soil temperature and nutrient content -- while working completely underground. Farmers and their equipment could work right over the top of them.

"The goal is to hopefully have these sensors in production agriculture. But first we need to develop them and answer more questions about how cost-effective they could be."