AMES, Iowa -- Mothers, take note. If you really want to curb your teens' chances of using alcohol, help them develop a self-view that doesn't include drinking. According to a new Iowa State University study, the power of positive thinking by moms may limit their children's alcohol use.

But beware. The opposite is also true.

"When mothers overestimated their teens' future use of alcohol, the teens developed the self-view that they were likely to drink alcohol in the future, which ultimately led them to drink more," said Stephanie Madon, an ISU associate professor of psychology and lead author of the study.

Madon collaborated on the study with ISU graduate students Ashley Buller, Kyle Scherr and Jennifer Willard; Max Guyll, an assistant professor of psychology; and Richard Spoth, director of the Partnerships in Prevention Science Institute at Iowa State. They analyzed data obtained from a series of interviews with nearly 800 Iowa mothers and their children over three to five years.

Their paper, "The Mediation of Mothers' Self-Fulfilling Effects on Their Children's Alcohol Use: Self-Verification, Informational Conformity, and Modeling Processes," was recently published in the Journal of Personality and Social Psychology, a professional journal of the American Psychological Association.

The team's previous research had found a link between a mother's belief about her child's likelihood of using alcohol and her child's actual use in junior high school and high school.

"We previously found that mothers' beliefs about their teen's future use of alcohol were about 50 percent correct and 50 percent incorrect, and that the incorrect portion of mothers' beliefs created a self-fulfilling prophecy -- teens behaved like their mothers had incorrectly expected them to," Madon said.

Their latest study builds upon those results.

"We derived our hypothesis from three large, well-known theories in the social/psychological literature -- self-verification theory, research on conformity and social learning theory as it pertains to modeling processes," she said.

According to Madon, self-verification theory proposes that people are motivated to confirm what they already believe to be true about themselves. The study found strong evidence that a mother's beliefs regarding her child's likelihood of using alcohol altered her child's self-view in either a positive or negative direction. The child then validated that new self-view by acting consistently with it later on.

"What people believe ultimately has an impact on what actually occurs," Madon said. "But it's not just because they believe it. It's not magic. When we believe something -- even if we're wrong -- when we believe it's true, we act as though it is. And sometimes when you act as though something's true, your behaviors will cause the belief to become true.

"So I think the moral here is to help children develop positive and pro-social self-concepts about themselves, because children are likely to make choices that match how they view themselves," she said.

The study also found some evidence that modeling -- a tendency for people to learn by watching others -- may alter a child's alcohol use. Madon says they had a little bit of support for modeling as it related to friends' alcohol use.

"We hypothesized that mothers may influence who their children are friends with and that children may learn how to behave by watching what their friends do," she said.

But there was no evidence that children conformed their own belief to their mothers' on how acceptable it was for adolescents, in general, to use alcohol.

"How acceptable children thought it was for adolescents to drink alcohol was explained by their own self-views, not by their mothers' beliefs about them. And that's not surprising given that what you think about yourself is going to be strongly tied to what you think is acceptable behavior," Madon said.

She says that it's still a good idea for mothers to instill in their children the belief that adolescent alcohol use is unacceptable, since the study did show a direct effect of teens' perceptions regarding the acceptability of alcohol use on their own drinking.

"The more acceptable teens believed adolescent alcohol use was, the more alcohol they tended to drink themselves," Madon said. 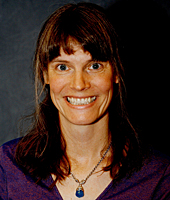 An ISU research team analyzed data obtained from nearly 800 Iowa mothers and their children and found when mothers helped their kids develop a self-view that doesn't include alcohol, those adolescents drank less. Their study was published in the Journal of Personality and Social Psychology, a professional journal of the American Psychological Association.

"What people believe ultimately has an impact on what actually occurs. But it's not just because they believe it. It's not magic. When we believe something -- even if we're wrong -- when we believe it's true, we act as though it is. And sometimes when you act as though something's true, your behaviors will cause the belief to become true."