Pearsall, Phoenix, graduated from Iowa State in 1971 with a Bachelor of Architecture degree. As a managing principal of DLR Group, he has been central to its growth into one of the nation's largest and most successful architecture and engineering firms with offices in 14 cities and a staff of about 500. In 2009, DLR Group ranked eighth in The Architect 50, Architect magazine's list of the top 50 U.S.-based architecture firms.

Established in 1980, the Petersen award is given annually to alumni, staff and friends of the university for distinguished work that advances the design and art professions. It is named for the noted artist who was Iowa State's sculptor-in-residence from 1934 to 1955.

Pearsall will be honored in a presentation at 7 p.m. Monday, Aug. 24, in Kocimski Auditorium, 101 College of Design. The award ceremony will be preceded by a 6 p.m. reception in association with the dedication of the King Pavilion, the college's building addition.

"Bryce's contributions are beyond measure," said Luis Rico-Gutierrez, dean of design. "He has reached the highest levels in professional achievement, is a national leader committed to advancing the profession to better respond to the challenges of the future and advocates passionately for innovation in the education of the next generation of students at his alma mater."

Pearsall joined DLR in Omaha shortly after graduation. He relocated to Phoenix in 1979 and became managing principal in 1986. He has worked on a number of projects related to the justice system, including correctional facilities, courts and administrative buildings, as well as educational facilities and corporate work.

He is a Fellow of the American Institute of Architects (AIA), national chair of the AIA Large Firm Roundtable, and a LEED (Leadership in Energy and Environmental Design) Accredited Professional. His project leadership and design work have appeared in national and international publications, including Architectural Record, Architecture, American School and University, Corrections Today, Education Facility Planner, Progressive Architecture, New York Times, and USA Today.

Pearsall was elected chair of the AIA Large Firm Roundtable in 2008, and has focused on cultivating a mutually supportive relationship between the practice of architecture and the nation's schools of design. He also promotes collaboration and idea sharing among the member firms practicing around the world.

In addition, Pearsall has provided leadership to both the ISU architecture department and the College of Design in multiple service roles. He is the chair of the college's Advancement Council, and a past member and chair of the Architecture Advisory Council. He played a key role in the realization of the King Pavilion.

In 2003, Pearsall received a Design Achievement Award from the college. He is a member of the Order of the Knoll and a life member of the ISU Alumni Association. 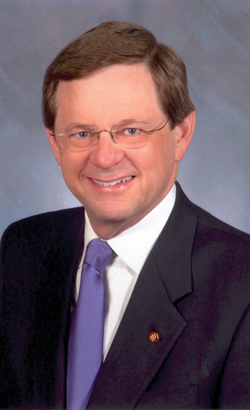 Bryce Pearsall, managing principal of DLR Group, will receive the College of Design's 2009 Christian Petersen Design Award at a ceremony Monday, Aug. 24. The Petersen award is given annually to alumni, staff and friends of the university for distinguished work that advances the design and art professions. Pearsall graduated from Iowa State n 1971 with a Bachelor of Architecture degree.

"Bryce's contributions are beyond measure."