Iowa State University student is passionate about dancing with bulls

And it's not just talk. The Iowa State University freshman is a bullfighter -- a type of rodeo clown that protects bull riders who dismount or are bucked off. The bullfighter distracts the bull before it hooks or tramples the cowboy.

"It's an adrenaline rush, knowing that I just saved a cowboy," Moore said. "That feeling is hard to find anywhere else. You get addicted to it." 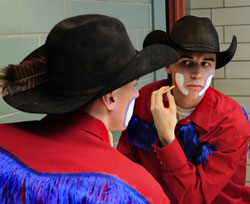 Moore recently was approved to receive The Professional Rodeo Cowboy Association card. This summer, the animal science major from Story City can earn cash for college in rodeos around the Midwest. But he isn't in it for the money.

Bullfighting was Moore's childhood dream. His father worked 30 years as a rodeo pick-up man. That's the guy who rides in to collect a cowboy from the bucking horse so he doesn't have to jump off at 30 mph.

"I've been watching, studying and talking to bullfighters my entire life," Moore said.

About two years ago, Moore decided to take the bull by the horns and try it out.

"Basically, they just put a vest on me and put me out in front of bulls," he said. "There's no real training. You kind of learn through experience."

In the ring, Moore wears protective gear--hockey pads, shin guards and a bullfighting vest. He's been knocked down, tossed up and flipped over. His only worry is being stepped on by his 2,000-pound opponent.

It takes agility, grit and guts to stay safe.

"You have to have good footwork and be somewhat athletic, but not necessarily fast, Moore said.

"You need to know where you're supposed to be and when," he said. "You just have to know how to react to the bulls. You can control what the bull does by the way you position yourself. It's just a lot of common sense and repetition."

Moore admits he's a bit nervous when he first enters the rodeo ring.

"But as soon as I get in front of a couple of bulls, I get warmed up and have a craving for them. I want more," he said.

"What I like about competing against bulls is that the bull doesn't care who you are. If you get hurt or knocked down, there's no time out. He's going to do whatever he wants. Everything is out of your control," he said.

Moore, who is a member of the Army ROTC at Iowa State, says his friends didn't think there was much to bullfighting until they watched him at a rodeo in Sioux City recently.

"As soon as I started getting thrown around, they thought it was cool."

Lucas Moore, a freshman in animal science from Story City, is a bullfighter -- a type of rodeo clown that protects bull riders who dismount or are bucked off. The bullfighter distracts the bull before it hooks or tramples the cowboy. Moore recently was approved to receive The Professional Rodeo Cowboy Association card.

"I just want to fight bulls. It's a craving."