Obama's Deputy Secretary of Agriculture at ISU, will discuss what's ahead for farmers

AMES, Iowa -- One of the top players in the U.S. Department of Agriculture will visit Iowa State University October 20 to talk about her vision for the nation's farming and food sectors.

U.S. Deputy Secretary of Agriculture Kathleen Merrigan will speak on "The Future of American Agriculture" at 8 p.m. Tuesday, Oct. 20, in the Memorial Union Sun Room. Her lecture, which is free and open to the public, is part of the National Affairs Series.

Merrigan will talk about her initiatives in the USDA, where she is second in command. A longtime advocate of sustainable and organic agriculture, Merrigan was chosen by former Iowa governor and current U.S. Agriculture Secretary Tom Vilsack to serve with him.

"This is the first time that an advocate of sustainable and organic agriculture has been involved in the highest-level meetings and decision making in the USDA," said Fred Kirschenmann, Leopold Center distinguished fellow, who was instrumental in bringing Merrigan to campus. "All of us are looking forward to hearing what Deputy Secretary Merrigan foresees for the future in these and other sectors of American agriculture."

Merrigan is the former director of the Agriculture, Food and Environment Program at Tufts University, where she was on faculty in the Friedman School of Nutrition Science and Policy. As a staffer on the Senate Committee on Agriculture, she helped shape the Organic Foods Production Act of 1990, which created national standards for organic foods and a federal program to accredit them. She has also served as administrator of the USDA Agricultural Marketing Service, which oversees the agency's organic program.

Merrigan holds a doctorate in public policy and environmental planning from the Massachusetts Institute of Technology. In addition to her government posts, she was a consultant to the Food and Agriculture Organization at the United Nations.

Merrigan's talk is cosponsored by the Leopold Center for Sustainable Agriculture, the National Affairs Series and the Committee on Lectures, which is funded by the Government of the Student Body. 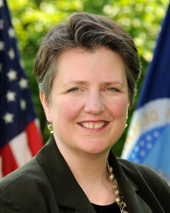 "This is the first time that an advocate of sustainable and organic agriculture has been involved in the highest-level meetings and decision making in the USDA."