AMES, Iowa -- When David Zimmerman finished his first full-length novel, "The Sandbox," three years ago, he found the demand for fictional tales from the Iraq War to be as desolate as his story's sand-swept setting. And because of it, he went through two agents -- the second who recommended he "kill" 150 pages and two characters -- and a steady stream of publishers' rejection letters.

"Some of them were pretty complimentary about it," said Zimmerman, an assistant professor of English at Iowa State University. "But at that point, Iraq movies were doing terribly and almost all of the letters mentioned that. They said, 'Nobody's going to buy any books about Iraq right now from the fiction standpoint.'"

Just as Zimmerman was ready to give up on the book, an editor from New York's Soho Press called, expressing interest in publishing it. And the 350-page hard cover edition was released this month, just in time to capitalize on new interest in Iraq War stories.

"The Hurt Locker" has won the Academy Award for "Best Picture." Matt Damon is starring in a new Iraq War movie, "The Green Zone." And Zimmerman's novel -- which is told through Pvt. Toby Durrant, whose stories are based on those shared by an Iraq War veteran and Iowa State student Zimmerman had interviewed -- has now been critically acclaimed by reviews in both Publisher's Weekly and The New York Times. The book is also listed among "New York Times® Best Sellers and New Releases" on the Kindle Books website.

The Iowa State author found the book's premise in a National Public Radio story about the mysterious disappearance of billions of dollars for U.S. military operations in Iraq. Upon reading more online, he learned that government officials just chalked up the missing money to the vagaries of war. But Zimmerman theorizes that it may have been used for secret military operations within the country.

"So the book theorizes where the money goes and what are the repercussions of the way it was being spent," he said. "And there's also this feeling of being caught up in something that's way larger than you -- something you don't understand, you have no control over, and you're not sure you like. So I've got a private -- basically my everyman soldier -- who puts his foot in it, not by anything he's done, but how he's being patently used by others to cover for themselves."

In his research for the book, Zimmerman interviewed some two dozen veterans of the Iraq conflict, most of whom had returned to Iowa State to become officers through the ROTC program. His subjects included one former soldier who told particularly interesting tales.

"The voice [of Toby] was one guy in particular," Zimmerman said. "He just had a really matter-of-fact and realistic way of looking at things. And he was really funny and smart. So my character is not quite as successful as this guy, but he basically told me, 'I joined because I was bored and I wanted some adventure.' And he knew what he was getting himself into."

Zimmerman says all of the veterans were career soldiers. And their wartime experiences shared some common themes.

"Even among these career veterans, they often didn't understand their orders or their missions -- and they said that's not uncommon," he said. "And it's not a problem until they start to feel like missions are really making them question what the point of them is -- and also the feeling that you're being sacrificed for no good reason. And I pushed that to the extreme in the book."

In addition to the interviews, Zimmerman also read soldiers' blogs on their Iraqi experiences, and watched countless YouTube videos shot by soldiers. He says many talked about attacks using improvised explosive devices, or IEDs, which he incorporates in the beginning of the book.

He also explores some wartime ghost stories from Iraq -- particularly a small base that made radio contact in the morning, but was found abandoned later that same day.

Vetting the book with vets

Before having the novel published, Zimmerman vetted it for accuracy with his interview subjects and other military sources.

"Over and over again, I heard soldiers say, 'Unless you go through it, you can't understand it,'" he said. "And even things that happened to one group of soldiers can't really relate to another group of soldiers. These experiences are so singular that they're really hard to express. And so I took that as a challenge."

It appears as though he met the challenge. Joel Turnipseed -- a Marine veteran and the author of "Baghdad Express: A Gulf War Memoir" -- was the New York Times reviewer who wrote that "The Sandbox" is "a strong debut," and "by aiming too high (with his dramatic prose), Zimmerman often hits the mark."

And apparently, the ISU author is going to continue to aim high. He has finished four other novels he is hoping to publish, including his latest titled "Heat Lightening," about a mother who learns that her 15-year-old daughter has been hiding a 25-year-old Marine in her bedroom. 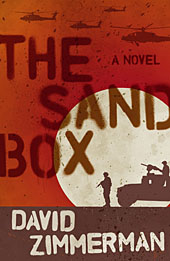 "Even among these career veterans, they often didn't understand their orders or their missions -- and they said that's not uncommon. And it's not a problem until they start to feel like missions are really making them question what the point of them is -- and also the feeling that you're being sacrificed for no good reason. And I pushed that to the extreme in the book."