AMES, Iowa - An Iowa State University researcher was part of team that is helping fill a nutritional hole in the diets of much of the population of developing countries.

Maria Salas-Fernandez, assistant professor of agronomy, worked with a group on how to introduce more vitamin A into corn hybrids to help cultures that depend on corn as a dietary staple.

"The idea of the study was trying to identify genes that are associated with increased levels of beta-carotene, which is a provitamin A compound, and that means when humans consume it, the beta-carotene can be metabolized into vitamin A," said Salas-Fernandez.

Vitamin A is one of several micronutrients that are deficient in the diets of many people, particularly those in Africa, according to Salas-Fernandez.

People who don't get enough can suffer from blindness and a generally reduced capacity to fight disease. Children and pregnant women are most susceptible, she said.

Scientists found that a gene (crtRB1) involved in the processing of beta-carotene into another compound (zeaxanthin) had a variant that is less active. This means that if a corn plant has that less active variant, more provitamin A is accumulated in the grain because it is not transformed into zeaxanthin.

This variant of crtRB1 was found in corn from temperate climates and is now being incorporated into germplasm from tropical corn that is adapted to developing countries.

As the beta-carotene rich corn will soon make its way to places like Africa, Salas-Fernandez says there are still cultural hurdles to overcome.

"Some people in some countries don't like to eat the yellowish or orange-ish corn," she said. "If we can overcome that barrier, this work can have a tremendous impact. Many of these people are subsistence farmers so they can keep growing these crops and have a much better diet. I think this is tremendous work."

Research was lead by Torbert Rocheford of Purdue University, West Lafayette, Ind., and the results are published in the current issue of the journal Nature Genetics.

Salas-Fernandez normally works with sorghum and was involved in the corn-focused project because she has experience working with the same genes that produce beta-carotene in sorghum. Her part of the research included sequencing and genotyping the different corn varieties. 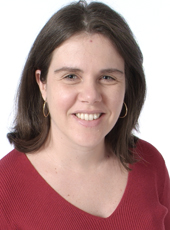 The idea of the study was trying to identify genes that are associated with increased levels of beta-carotene, which is a provitamin A compound, and that means when humans consume it, the beta-carotene can be metabolized into vitamin A.