AMES, Iowa - For the past three months, an Iowa State University landscape architecture class has worked with the people affected by the Lake Delhi dam failure to sort out options for the future of the lake and surrounding area. On Friday (Dec. 10), they'll present an analysis of the impacts of the dam break and scenarios for the region's recovery.

The presentation will be from 1 to 6 p.m. in the Oak Room and Campanile Room of the Iowa State Memorial Union. The public is invited to attend.

On July 24, the Delhi Dam on the Maquoketa River in eastern Iowa collapsed suddenly under pressure from rising flood waters. The breach drained a nine-mile recreational lake behind the dam, and the resulting flash flood destroyed 16 homes, caused significant damage to more than 70 others and released tons of accumulated sediment downstream.

In the wake of this disaster, Gov. Chet Culver created the Lake Delhi Recover and Rebuild Task Force to develop strategies to assist in the recovery and rebuilding of the Lake Delhi area, and to help determine whether - and under what conditions - the dam should be rebuilt. The task force established several committees, including the economic and community development committee, charged with establishing principles and policies for public investment that result in improved local and regional economic development and public benefit.

Meanwhile, ISU landscape architecture faculty Julia Badenhope and J. Timothy Keller began studying the issue and proposed to help local leaders and residents discover alternatives for recovery. In conjunction with ISU Extension Community and Economic Development, the two approached the director of the Iowa Department of Economic Development, who chaired the task force's economic and community development committee, with a plan to collect public input, conduct community and economic analyses of the area and create scenarios for future development.

"The students' role is to assess and communicate the viewpoints, perspectives and desires of different stakeholders, to give them a voice in the process and bring them all to the table," Badenhope said. "In most class projects, students get to do what they want. In this case they are a voice for what others want."

In late August, the class visited the Lake Delhi area to meet with the Delaware County economic development director as well as the president of the Lake Delhi Recreation Association, which owns and operates the dam. They also toured the failed dam and former lake site.

Inventory of conditions before and after

They then performed an inventory of pre- and post-disaster conditions - such as water quality, demographics, land ownership and economic conditions - and produced a four-part analysis of the region that includes watershed functions and processes, health needs and areas of concern, economic models for spending in river/lake developments, and sociocultural factors that could affect future development.

The class worked closely with Dan Otto, ISU professor of economics and ISU Extension economist, on the recreational spending models. Paul Anderson, ISU professor of landscape architecture and agronomy, helped the students perform geographic information systems (GIS) analysis and modeling. They also drew on the expertise of Iowa State and ISU Extension faculty from several other departments and specialists from the Iowa Department of Natural Resources to inform their analysis models.

The students also assisted with stakeholder focus groups in Manchester, Delhi, Hopkinton, Anamosa and Monticello. Guided by ISU Extension facilitators, the groups encompassed lake residents and landowners, local business owners and downstream stakeholders, including farmers, paddlers and anglers. "Our role was to take notes, observe and listen," said graduate student Paola Sepulveda, Ames. "It was a good experience to be able to really see people's reactions and hear what they're thinking. We also reviewed the session transcripts to identify major themes and ideas presented by each group."

Based on a methodology developed by Badenhope, students held "special places" mapping workshops to gain insight into what's valued in the area by those who live there.

"We asked people to mark on an aerial map of the area any special places that are important to them," said graduate student Deb Cooper, Ames. "They shared memories and traditions they value in places around the lake, along the river corridor and in the surrounding communities."

The focus groups and mapping sessions revealed that while there are significant differences in stakeholder visions for the future, all groups are concerned about water quality, dam safety, watershed management, and the economic impact both immediately around the former lake and to downstream businesses affected by the dam breach. They also value community ties and share strong attachments to the area's natural beauty, as well as the recreational activities they enjoy in the lake/river corridor, such as boating, fishing and bird watching.

"This was an opportunity for students to understand how passionate people are about where they live and learn how to apply what they know in a more human context," Badenhope said. "Their task now is to develop a series of potential schemes that fulfill these community desires and give people the tools to achieve their goals."

Three scenarios for the future

The class presented its preliminary analyses at a public meeting in Manchester on Nov. 5. Students are now working on three development scenarios for the future, including two that address rebuilding the dam and lake and one that addresses restoring the Maquoketa River to its natural flow. 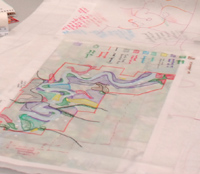 One rebuilding scenario is based on residents incorporating as a municipality, while the other assumes county ownership of the dam. The third scenario examines the potential impact of restoring the river and the related effects on tourism and businesses.

"These scenarios are not completed designs or implementation plans, but rather studies that explore implications of potential development decisions," Cooper said.

"Helping the affected people in that area imagine alternatives gives them hope that even if things are different, they can be just as good or even better than before," Sepulveda said. "It opens up possibilities residents may never have thought could happen in their community, whether the dam is rebuilt or not."

One significant finding was that sedimentation and nutrient pollution from the watershed is the most important factor affecting the success or failure of any future dam scenario. As a result, Badenhope says, future river restoration and dam reconstruction studies must take into account the need for watershed management. One group of students worked with faculty and Iowa DNR experts to design a conceptual watershed management strategy to work with all future development scenarios.

"It was fascinating for me to learn how you try to get stakeholder groups to discuss options and find solutions that work for everyone, whether at the top or bottom of the watershed," said fifth-year student Cody LeClaire, Toddville. "This project has emphasized that design is about working with people and solving problems that affect them in their daily lives."

Preliminary information from the studio was provided to the task force and included in its report to the governor on Dec. 1. That report is available at www.iowalifechanging.com/lakedelhi. Copies of the students' analyses, watershed study and scenario presentation boards also will be made available in conjunction with the final studio report, which will be released on Dec. 20.

For the past three months, an Iowa State University landscape architecture class has worked with the people affected by the Lake Delhi dam failure to sort out options for the future of the lake and surrounding area. Co-instructors Julia Badenhope and J. Timothy Keller integrated field work, practical research and academic study within the project-based design studio, which included 30 upper-level undergraduate and graduate students. They collected public input, conducted community and economic analyses of the area and created senarios for future development. The students are sharing their report with Gov. Chet Culver's Lake Delhi Recover and Rebuild Task Force and will present their analysis of the impacts of the dam break and scenarios for the region's recovery Friday afternoon in the Memorial Union.

"This project has emphasized that design is about working with people and solving problems that affect them in their daily lives."