Philosopher and author Peter Kreeft to speak Feb. 19 at ISU on evil and suffering

AMES, Iowa -- A philosophy professor and author of more than 50 books, many dealing with the existence of God, will speak at Iowa State University on Friday, Feb. 19. Peter Kreeft will present "The Problem of Evil and Suffering" at 7:30 p.m. in Stephens Auditorium. His talk is free and open to the public. 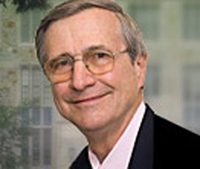 Kreeft is a professor of philosophy at Boston College, where he has taught since 1965. His ideas draw heavily from religious and philosophical tradition, especially Socrates, Thomas Aquinas and C.S. Lewis. He is a regular contributor to several Christian publications and a frequent speaker at conferences. Kreeft's books include "Making Sense Out of Suffering," "Handbook of Christian Apologetics," "Fundamentals of Faith," "Back to Virtue," "The Philosophy of Tolkien: The Worldview Behind The Lord of the Rings" and "How to Win the Culture War."

Kreeft's lecture is cosponsored by Aeropagus, Campus Crusade for Christ, Catholic Student Community, Christian Educators Network, Christian Faculty and Staff Association, Collegiate Presbyterian University Ministry, Lutheran Student Fellowship, The Navigators, The River, The Rock, The Salt Company, several Ames churches and businesses, and the Committee on Lectures, which is funded by the Government of the Student Body.

"The Problem of Evil and Suffering"


Free and open to the public