AMES, Iowa - "A Friend Indeed: The Bill Sackter Story" is a documentary about a forgotten man and an uncommon friendship that shattered the world's perceptions of people with disabilities.

Iowa Staters can see the film at 7 p.m. on Wednesday, Feb. 24, in the Memorial Union Great Hall. A discussion with filmmaker Lane Wyrick will follow. The event is free and open to the public.

Bill Sackter's intellectual limitations and family circumstances left him institutionalized for more than four decades. He drifted for another 10 years before meeting a Minneapolis college student, Barry Morrow. The two became close friends. Morrow became Sackter's guardian. And when Morrow accepted a job at the University of Iowa's School of Social Work in the 1970s, he brought Sackter with him. Sackter was a beloved figure on the UI campus, playing his harmonica and selling coffee at Wild Bill's Coffeehouse, which he ran from 1975 until his death in 1983. He was named Handicapped Iowan of the Year in 1976.

Wyrick is a graduate of the University of Iowa's film school, and worked on feature films including "True Lies," "Man's Best Friend" and "Dead Connection." He also worked on several television projects, music videos and commercials.

He returned to his hometown of Iowa City in 1995 and formed Xap Interactive, a digital-based video, film and DVD production company.

This lecture is sponsored by Pi Kappa Phi fraternity's philanthropy, "Push America;" The Arc of Story County, SUB Awareness Committee, Alliance for Disability Awareness and the Committee on Lectures, which is funded by the Government of the Student Body. 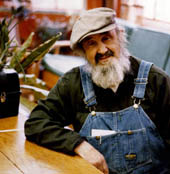 A screening of the documentary "A Friend Indeed: The Bill Sackter Story" will be at at 7 p.m. on Wednesday, Feb. 24, in the Memorial Union Great Hall. A discussion with filmmaker Lane Wyrick will follow. The event is free and open to the public.