AMES, Iowa - Genetically stacking traits in corn in order to increase production, resist insects, improve standablity and many other characteristics is so common in agriculture that producers have come to expect it.

Some traits found in corn help it function as a better source for biofuels.

Lately, biofuels research has included a focus on using algae as a source for biofuels.

The problem is no one really understands the genomes of most algae well enough to consider the possibility of stacking traits to make them produce more oil, offer better thermal resistance or any of the other characteristics needed.

Martin Spalding hopes to change that.

With the help of a $4.37 million grant from the U.S. Department of Energy as part of the American Recovery and Reinvestment Act, Spalding intends to develop a micro-algal platform that will allow micro-algae to be treated as a crop.

Spalding, professor and chair of genetics, development and cell biology and a council member of Iowa State's Plant Sciences Institute, is working with the one type of alga, Chlamydomonas, that is already genetically mapped. 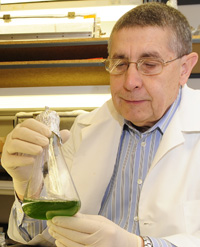 Martin Spalding is working on stacking traits in Chlamydomonas algae.
"We have a sequenced genome, we understand the metabolism, and we have the tools available to us to work with this alga," he said.
Currently, the micro-algae used in biofuels production are wild strains found in nature and have certain traits that growers like, such as high oil production.

"Using those algae is a good strategy," Spalding said. "But the limitation with that strategy is that it has no flexibility, because the algae can't be manipulated genetically.

"The advantage of using a genetically flexible alga like Chlamydomonas is that we can manipulate it in various ways to tailor it to what the needs are," he said.

"Rather than look for an alga that produces trait 'x' or trait 'y' and then trying to adapt each new strain to production, which is a very difficult process, we are manipulating Chlamydomonas to meet x and y."

Spalding said the best analogy would be to stacking traits in corn.

Spalding believes his three-year study will produce many desirable traits in Chlamydomonas alga.

"Our project will probably lead to increased production of basically vegetable oil that can be converted to biodiesel," Spalding said. "Using the same process we are using to increase that oil production, we also could divert the production into hydrocarbons, which are closer to petroleum."

The end result could have several benefits.

And since algae are not a feed source for animals, using algae for biofuels will not lead to higher commodity or food prices.

Spalding is working with Basil Nikolau, the Frances M. Craig Professor in the departments of biochemistry, biophysics and molecular biology and food science and human nutrition, and deputy director of the National Science Foundation Engineering Research Center for Biorenewable Chemicals based at Iowa State, and also an associate scientist with the U.S. Department of Energy's Ames Laboratory; Larry Halverson, an assistant professor of plant pathology; Eve Wurtele, a professor of genetics, development and cell biology; and David Oliver, an associate dean in the College of Liberal Arts and Sciences and professor of genetics, development and cell biology. Researchers at Purdue University, West Lafayette, Ind., will also collaborate on the project.

The advantage of using a genetically flexible alga like Chlamydomonas is that we can manipulate it in various ways to tailor it to what the needs are. 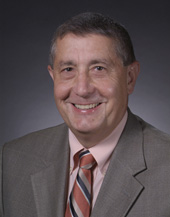