AMES, Iowa -- When world renowned bass-baritone Simon Estes, the F. Wendell Miller Distinguished Artist in Residence at Iowa State University, performs the world premiere of "Save the Children, Save Their Lives," at Friday's "Celebrate Africa - The Grand Finale" concert -- the final entertainment event of the 2010 FIFA World Cup South Africa™ -- he'll be singing to a distinctly Iowa State accompaniment.

Michael Golemo (pictured right), a professor and chair of music and director of bands at Iowa State, arranged the orchestral accompaniment, which was recorded for the concert by a small orchestra comprising three ISU faculty members and four student music majors.

"Mike (Golemo) made the arrangement for this song and it is sensational and faculty members and students formed an orchestra and we recorded it right down in Martha-Ellen Tye Recital Hall," Estes said. "And I've given Iowa State University and Mike Golemo credit on the CD jacket. People are going to see that all over the world."

"Simon asked if I'd be interested in working with him on this project," Golemo said. "I do a fair amount of musical arranging for Simon -- both band and orchestra -- and was happy to help with this project."

Among the ISU faculty members who participated, Golemo reports that several played multiple tracks in the recording. Mike Giles, a lecturer in music, played both saxophone and piano. Jonathan Sturm, an associate professor, recorded one violin part about 20 times to make it sound like a full string section by layering tracks.

Estes will be performing with his Simon Estes Music School Choir from South Africa and is one of several guest performers at Friday's concert in the Coca-Cola Dome in Johannesburg. Other featured performers include legendary Italian tenor Andrea Bocelli, Canadian singer/songwriter Bryan Adams, and South Africa's own soprano sensation Pretty Yende.

The Grand Finale Concert will support the international campaign "United Against Malaria," an effort to fight the disease. 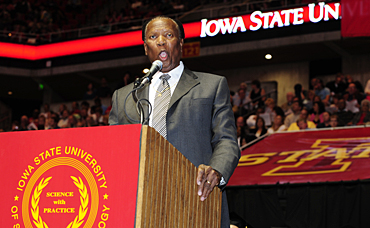 Estes actually got the discussion started on the event during a meeting with FIFA (Fédération Internationale de Football Association) President and CEO Sepp Blatter in Zurich, Switzerland. FIFA is the international governing body of football (soccer).

"He (Blatter) gave me an hour of his time this past May and I said, 'You know, I'd really like to do something for the children at my school and these children in Africa, and a song has been written called 'Save the Children, Save Their Lives,'" he said. "I told him, 'I'd really like to premier that song there [at the World Cup in South Africa] and get recognition for it and make a CD for it to help my school in South Africa.' And he (Blatter) flipped over the idea. He said, 'I will make sure that you sing at some of the events for the World Cup of 2010.'"

Estes and the choir from his South African school will open Friday's concert with the premier of "Save the Children, Save Their Lives" as a tribute to South Africa. He has already included the song on a CD that has been recorded for release when he gets back to Iowa on July 17.

"For the whole recording, I have Negro spirituals and Broadway melodies on it," Estes said. "And all of this was recorded in the state of Iowa."

Some of the proceeds from the sale of the CD will benefit the Simon Estes Music School. Estes established the school in 1997 after he was moved by young student singers who greeted him at the Cape Town airport.

"They were singing in their native tongue and the only recognizable words I understood was my own name," Estes said. "Upon asking someone about the choir, I learned they were singing about Simon Estes and 'Welcome home, we love you.'"

Estes further investigated and found that the young singers were from a very impoverished part of Cape Town. He decided to help them by establishing the school. Since its creation, it has grown from 60 students to an institution now serving some 300 learners from grades 8 to 12.

Because of the impact next Friday's concert may have on those students, Estes ranks it among his most memorable performances, which include singing for six U.S. presidents and international dignitaries like former South African president Nelson Mandela.

"I've sung at the White House, and that's been a great honor too, but this is so international and we know how important sports is in the world today," Estes said. "And the fact that this is the first time that the World Cup has been in South Africa -- a country that is predominantly populated by people of color and yet had apartheid for over 40 years -- and I have the opportunity to sing there with my choir, it's right up there at the top."

Estes is also planning to contribute some of the proceeds from the CD to scholarship initiatives in U.S. schools. 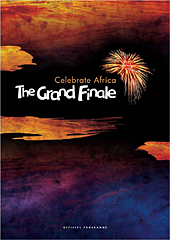 When world renowned bass-baritone Simon Estes, the F. Wendell Miller Distinguished Artist in Residence at Iowa State, performs the world premiere of "Save the Children, Save Their Lives," at Friday's final entertainment event of the 2010 FIFA World Cup South Africa™, it will feature an accompaniment arranged by Michael Golemo, a professor and chair of music at ISU, and recorded by a small orchestra comprised of ISU faculty and students.

"Mike (Golemo) made the arrangement for this song and it is sensational and faculty members and students formed an orchestra and we recorded it right down in Martha-Ellen Tye Recital Hall. And I've given Iowa State University and Mike Golemo credit on the CD jacket. People are going to see that all over the world."