AMES, IA - The 17-year cicadas found in central and southeast Iowa aren't supposed to come out until 2014, but a small percentage are emerging now, four years ahead of schedule.

Lewis started getting reports of these early-risers two weeks ago. The insects are found in much of the state from Boone County south to the Missouri border and east to the Mississippi River.

Periodical cicadas live underground for 17 years then transform to the adult stage to appear above ground for a brief period. They are known for their mass emergences of tens of thousands per tree. The adults mate, lay eggs and die. The 17-year cycle is by far the longest of any insect in Iowa. 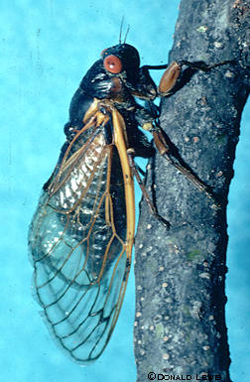 Lewis has been collecting informal reports from people in Polk, Madison, Warren, Monroe, Des Moines and Decatur counties who are hearing the insect this year. The male cicada makes a loud, whirring buzz-like sound intended to attract a mate.

After mating, the females lay the eggs in the tree, and then die, as do the males. There may be up to 20,000 to 40,000 cicadas in each tree in which they are found. In about four weeks, the cicadas are gone for another 17-year cycle.

Types found in the other parts of the country are either on 13-year or 17-year cycles and emerge in different years. Another type of cicadas, called annual cicadas, come out in the second half of the summer every year.

During their 17-year (or 13-year) wait, cicadas attach themselves to tree roots to feed off the sap. Scientists believe that cicadas are taking seasonal signals from the trees on how many years have passed.

In parts of the eastern half of the country, periodical cicadas have been emerging early as well, almost always by the same four-year period. Cicadas have not been known to emerge early before the year 2000. Lewis said no one really knows why.

"There's a whole lot of mystery to what the cicada is counting and what happened in (some) winters that made it count it twice," he said. "We do know we've got to enjoy it while we've got it.

"This is exciting to entomologists, and it is exciting to people who appreciate this phenomenon. And it's not harmful to trees, crops, people or property."

While not offering a scientific explanation, Lewis has theories on why the last decade has seen so many early emergences of the insect.

"The alarming part is, what has changed so much in our lifetime that the cicadas would change a fundamental part of their lifecycle and make this mistake?" he asks. "Climate change is one possibility."

To learn more about cicadas, click here and here. 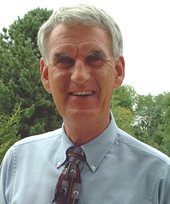