AMES, Iowa -- Although Gerardo Sandoval's new book is about the revitalization of a downtown Los Angeles immigrant community, he's finding the same intricate global relationships are at play in rural Iowa's meatpacking communities. With their growing immigrant populations, towns like Perry and Postville are on "the cutting edge of globalization," says the Iowa State University assistant professor of community and regional planning.

Sandoval's book, "Immigrants and the Revitalization of Los Angeles: Development and Change in MacArthur Park," (Cambria Press, 2010) tells the story of how a distressed, low-income immigrant neighborhood turned a large-scale redevelopment project to its advantage.

It is based on Sandoval's doctoral dissertation at the University of California, Berkeley, which received the 2009 Barclay Gibbs Jones Award for Best Dissertation in Planning from the Association of Collegiate Schools of Planning. The book offers lessons for other immigrant communities, large or small.

"The same mechanisms, economic structures and influences bring immigrants to large cities and to small towns," Sandoval said. "Here in Iowa, it's all on a smaller scale, a microcosm of what I saw in Los Angeles."

MacArthur Park was a distressed, low-income Latino community when the city decided to build a subway station. Sandoval conducted his research 10 years after the subway was built. Traditionally, Sandoval said that kind of large, top-down infrastructure project displaces the local community. It is then redeveloped, often leading to gentrification with new people moving in and upgraded housing built.

But Sandoval found that the seemingly "blighted" immigrant neighborhood actually had abundant economic, social, cultural and political resources -- from a network of community-based organizations to retail and businesses that catered to the immigrant population.

Not only did the Latino community in MacArthur Park survive the redevelopment, it came out ahead. Sandoval's book describes how this positive outcome -- an "anomaly within urban planning" -- came about. He found that when the city institutions and the immigrant community worked together, adapted to each other and co-evolved during the development process, revitalization -- not redevelopment -- occurred.

"They created something different from what was already there, and I argue, that it's something better," he said.

Sandoval is a native of Guatemala who grew up in Los Angeles. In 2008, he joined the faculty of Iowa State, where his research focuses on the intersection of economic and community development in immigrant communities. He's finding plenty to study in Iowa where the "complexities of globalization" are similar to those found in urban areas.

"In Iowa, however, these trends are magnified and you can easily see and measure the economic, social and cultural impacts that immigrants have on these towns," Sandoval said.

In Perry, for example, Latinos account for nearly 50 percent of the elementary school students. Sandoval and his students from ISU helped city leaders integrate the immigrant community into the city's downtown revitalization plan. The students gathered community input, studied the town in depth and created a plan that built upon Perry's underutilized and unique social, economic and cultural capital. They found the immigrant community had many of the same strengths Sandoval had seen in MacArthur Park.

"The people who are reinvesting in these towns are the Latino immigrants. They build their own stores, and open new businesses that cater directly to the immigrants," he said.

Among the students' recommendations to Perry: establish a business incubator, redevelop a park, create a central plaza and set up a centralized resource center.

The town of Postville, home to the nation's largest, kosher meatpacking plant, was turned upside down in May 2008 during the biggest immigration raid in U.S. history. Nearly 400 undocumented workers were arrested. Most were deported; others detained.

While most researchers are looking at the impacts this had on Postville, Sandoval is focused on the transnational connection between Postville and two tiny towns in the mountains of Guatemala. El Rosario and Calderas supplied most of Postville's immigrant workers. 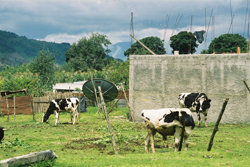 "I'm trying to reconstruct a narrative of what happened to the Guatemalan communities," he said. "I'll show the economic, social and political connections, how they were linked with Postville, and what happened when those links were broken so abruptly and completely," Sandoval said.

During the years that the Postville workers sent thousands of dollars each month back to their families in Guatemala, the towns changed dramatically. Houses made of the traditional sugarcane were rebuilt of concrete. New businesses opened. The local governments started investing in basic infrastructure. The towns began to prosper.

"Then the remittances stopped over night. And that pretty much decimated the towns," he said. "I don't see them coming back either."

Sandoval, who intends to complete his research this summer, said whenever there are immigration raids in the U.S., the "feeder" towns in Latin America also experience the repercussions.

"As a case study, everything about Postville is so dramatic. It's a small scale, but the impacts are magnified," Sandoval said. "I think this case could easily provide important lessons to the national discourse on immigration."

"The same mechanisms, economic structures and influences bring immigrants to large cities and to small towns. Here in Iowa, it's all on a smaller scale, a microcosm of what I saw in Los Angeles."

Sandoval believes in giving back to the people and communities he researches.

"I'm trying not to be a researcher who just goes into a community and exploits information for the sake of furthering one's academic career. That's one of my pet peeves," he said.

In Guatemala, he's working with international agencies and local community groups to develop mobile telecommunication centers. A mobile telecenter is an off-grid, solar-powered mobile classroom designed for use in rural areas without access to electricity or the Internet. Designed to travel in mountainous terrains, the bookmobile-like buses contain laptops and a satellite dish. They would visit remote villages, like the ones Postville workers were from, and provide computers and Internet access for school children and adults.

"If someone wanted to start a sustainable ag program or extend provincial health services, for example, this would give them access to information and international aid groups," Sandoval said.

Sandoval and a retired colleague, who has extensive international development experience and previous success with such vehicles in Ecuador, are working to secure funding. Each bus costs about $60,000 fully loaded.