One was a soldier from Sioux City, Charles Thomas Hopper, who died in the Korean War.

Former students are eligible for name placement in Gold Star Hall if they graduated from or attended Iowa State full time for one or more semesters, and died while in military service in a war zone. As names become known, they are added to the wall and the soldiers are remembered in the Gold Star Hall Ceremony on Veterans Day. Names of the Iowa State students who died in the Korean War were added in 1984, without ceremony. The university intends to honor several each Veteran's Day.

Iowa State is able to memorialize Hopper this Veterans Day thanks to the help of his sister and several college and service friends, who shared remembrances. Kathy Svec, retired ISU Memorial Union marketing director, researches each person through local newspapers, genealogical and historical societies, yearbooks, phone directories and online resources to track down family members and piece together each soldier's life story.

Sioux City and on to Iowa State

Charles Thomas Hopper was born March 20, 1930, in Sioux City. After his mother passed away in 1942, his father Ward remarried. Hopper and younger brother, Ward Jr., gained a sister, Carol. She remembers growing up in a neighborhood near Grandview Park with Hopper, whom she described as being a "really smart" book- and music-loving natural leader with many friends.

After graduating from Central High School with high honors in 1947, Hopper went to Iowa State and majored in chemical technology. He signed up for Army ROTC and played piano for church services. He was part of a tightly knit group of friends who lived in a men's residence in Alumni Hall on central campus. They remember him being involved in many activities, achieving well academically, having a great sense of humor, enjoying harmless pranks and being a leader. Hopper was president of his residence hall and of the YMCA.

Hopper graduated from Iowa State in June 1951 and worked at Mallinckrodt Chemical Corporation, St. Louis, until entering military service in October. He trained at Fort Sill, Okla., where he offered his talent as an organist for church services on the post. 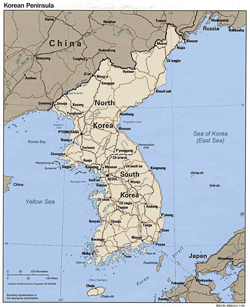 About a year later, Hopper was assigned to C Battery, 555th Field Artillery Battalion, 5th Infantry Regimental Combat team, as a second lieutenant. In spring 1953, he was promoted to first lieutenant and commander of C Battery, located in the eastern Korean front, right below the 38th parallel in an area called the Punch Bowl. They later moved to the central region, just east of the infamous Iron Triangle.

In mid-June 1953, Hopper's unit was engaged in a fierce battle for Outpost Harry. The Chinese pushed the 3rd Division, and Hopper's 5th Regiment was on the line. Launching a massive offensive (the Battle of Kumsong River Salient), the Chinese forces targeted what they perceived to be a soft spot in the allied lines. Six South Korean divisions initially held the center of the 20-mile-long front, with U.S. troops guarding the left and right flanks.

On July 13, under cover of overcast skies that hampered air cover and reconnaissance, the Chinese threw some 80,000 troops at the Korean forces. Hostile artillery fired more rounds than at any time during the war. The attack nearly destroyed two Korean divisions as the Chinese broke through the line and the Koreans fell back in confusion.

During the initial attack, Hopper's 555th Field Artillery Battalion was overrun while providing direct support for the defending line. Chinese divisions hit the 555th around 9:45 p.m., charging three sides of the U.S. unit and smashing the perimeter, batteries and command post. The line buckled. A few hours later, the Chinese assaulted the artillery battalion, causing heavy losses of personnel and equipment, and taking allied prisoners.

Hopper died in the assault on July 14 at the age of 23. His remains were not recovered. The 555th suffered 300 killed or missing. Fighting in the area stopped July 27, the day that the ceasefire ended the war and the 38th parallel became the boundary between North and South Korea.

Hopper was awarded the Bronze Star, Purple Heart, Korean Service Medal, National Defense Service Medal, Korean Presidential Unit Citation and the Republic of Korea War Service Medal. His name is inscribed in the Courts of the Missing at the National Memorial Cemetery in Honolulu.

In his memory, the Hopper family presented a processional cross to St. Thomas Episcopal Church in Sioux City. 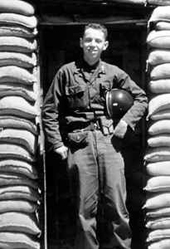 Hopper in a bunker, Korea