One was a soldier from Manson, Delbert Ray Peterson, who died in the Vietnam War.

Former students are eligible for name placement in Gold Star Hall if they graduated from or attended Iowa State full time for one or more semesters, and died while in military service in a war zone. As names become known, they are added to the wall and the servicemen are remembered in the Gold Star Hall Ceremony on Veterans Day.

Iowa State is able to memorialize Peterson this Veterans Day thanks to the help of his brothers and sisters Denny, Jolene, Bob, Chuck and Judy, who shared remembrances. Kathy Svec, retired ISU Memorial Union marketing director, researches each person through local newspapers, genealogical and historical societies, yearbooks, phone directories and online resources to track down family members and piece together each soldier's life story.

Delbert Ray Peterson was born in Manson on May 11, 1939, the first of seven children born to Raymond and Bernice Peterson.

In elementary school, he memorized and presented the Gettysburg Address at the Memorial Day program and did so for many years. As a Manson High School junior, Peterson was elected a state senator at Hawkeye Boys State. He lettered in football and basketball, played in the band, sang in mixed chorus and boys' quartet, and participated in debate, speech and drama. 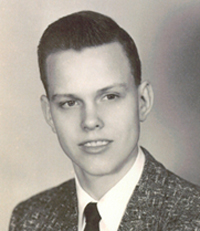 Peterson was class president twice, as well as student council vice president. On weekends, he worked at his dad's gas station, Pete's Mobil. He graduated in May 1957.

"Delbert knew he had to apply himself to become a mechanical engineer," said his brother Chuck. "And apply himself he did -- he worked hard and was valedictorian of his high school class."

At Iowa State, Peterson served as social chair of his house, joined the Lutheran Student Association, sang with the Festival Chorus and Men's Glee Club, and appeared in "The Music Man" and "Kiss Me Kate." He also worked several jobs, earning 80 percent of the cost for his education.

From ROTC to Vietnam

In 1961, Peterson took Air Force ROTC training in Washington, and was initiated into the O'Neil Squadron of Iowa State's Arnold Air Society.

After graduating with a degree in mechanical engineering in July 1962, Peterson was commissioned a second lieutenant in the U.S. Air Force Reserve. He went on active duty in fall 1963. In November 1965, Peterson was assigned to the 4th Air Commando Squadron (Fire Support), 14th Air Commando Wing, Tan Son Nhut Air Base, Vietnam, Seventh Air Force. He was co-pilot on an AC-47, a DC3 commercial airliner converted for military use. 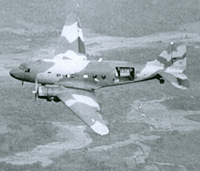 According to eyewitness accounts, on March 9, 1966, about 2,000 North Vietnamese launched an attack on a U. S. Special Forces camp in A Shau Valley, a mile-wide valley in the mountains near the Laotian border. Surrounded, the 20 U.S. troops and 375 South Vietnamese soldiers retreated to a bunker. They desperately needed air support and rescue would be difficult: Under a 400-foot ceiling, a steady rain of enemy fire tore up the landing strip and pinned down the defenders. They were in danger of being overrun.

Captain Willard Collins and his AC-47 crew, just in from a night mission, were dispatched to support the A Shau garrison. First Lieutenant Peterson was co-pilot with four other crew members aboard.

After two unsuccessful attempts to get under the clouds, they flew into the valley at treetop height, located the outpost and made a firing pass at the besiegers. Flying through a gauntlet of fire on the second pass, their AC-47 took hits to the right engine; then the left engine was knocked out.

Collins and Peterson made a difficult crash landing on the mountain slope. All crew members survived with minor injuries, except a gunner whose legs were broken. Knowing an enemy attack was inevitable and the gunner could not be moved, Collins and Peterson set up defense at the site. A few minutes later, a crew member was wounded.

Confident that a rescue helicopter would respond, they repulsed the first attack, which came 15 minutes after they hit the ground. A second attack was turned back, but Collins and another crew member were killed. With only four men left to defend the perimeter, the chance of holding out until a chopper arrived looked bleak. As a third attack began, they heard the helicopter. But enemy machine gunfire flashed just yards from the downed plane. If not silenced, the gun would likely shoot down the chopper.

Peterson, now in command, charged the gun, spraying fire from his M-16 rifle. The hostile fire diminished as the helicopter dropped to pick up three crewmembers. Peterson and the two dead men were left behind.

When last seen, Peterson was alive and crawling behind the crashed AC-47 to take up a position to secure the aircraft. About 20 minutes after the rescue, a Special Forces ground team arrived. Although they found the two bodies, the only sign of Peterson was blood spots leading away from the crash site.

Because of heavy enemy presence, it was believed that Peterson had been captured. He was listed as Missing in Action until February 1978, when his status was changed to killed in action. During that period, he was promoted to major.

Both Peterson and Collins were awarded the Air Force Cross posthumously. This was one of the few instances in the Vietnam War when both pilots of an aircraft were honored with the nation's second-highest decoration for valor. And it was the only mission in which the awards were made for extraordinary heroism in both air and ground combat.

From 1969 to 1972, Chuck Peterson met several times with Iowans Care, an organization working for a full accounting of Vietnam MIAs. Family members were asked to view pictures obtained from propaganda films or smuggled out of North Vietnam but Delbert Peterson was not identified. In the mid-1990s, villagers near the crash site found Peterson's identification tag, a chain and key. Excavations later revealed a military identification and a religious medal, but no remains. 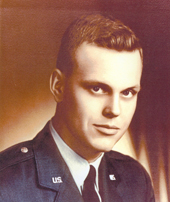 "Delbert knew he had to apply himself to become a mechanical engineer. And apply himself he did -- he worked hard and was valedictorian of his high school class."