Newt Gingrich will speak about his new book at Iowa State Nov. 16

AMES, Iowa -- Former Speaker of the House of Representatives Newt Gingrich will discuss his new, historical novel during a talk at Iowa State University on Tuesday, Nov. 16. "Valley Forge: A Story of Endurance and Transformation" will be at 6:30 p.m. in the Memorial Union Great Hall. It is free and open to the public.

Published this month, "Valley Forge: George Washington and the Crucible of Victory," is the eighth novel from the writing team of Gingrich and William Forstchen. It chronicles the unique tribulations of time and place when Washington and his Continental Army were forged into a fighting force that would win a revolution and found a nation. Facing severe shortages of food, warm clothes and tools, Washington's battered, demoralized army spent the bitter winter of 1777 approaching total collapse. They endured and were joined by a German volunteer who builds them into a professional fighting force that will change the course of history.

A former history professor, Gingrich served in the United States House of Representatives as a Republican from Georgia for 20 years. He was Speaker of the House from 1995-98, the first Republican to hold that position in 40 years. Gingrich spearheaded the "Contract with America," a commitment to cut wasteful government spending.

Since leaving Congress, Gingrich has founded the grassroots organization American Solutions for Winning the Future. He is a senior fellow at the American Enterprise Institute, a distinguished visiting fellow at the Hoover Institution and a contributor to Fox News. With his wife Callista, Gingrich hosts and produces historical and public policy documentaries. Other novels in the alternate-history genre that he has written with Forstchen include "Gettysburg," "Pearl Harbor," and "Days of Infamy."

Gingrich's presentation is cosponsored by the College Republicans and the Committee on Lectures, which is funded by the Government of the Student Body. More information on ISU lectures is available at http://www.lectures.iastate.edu, or by calling (515) 294-9935. 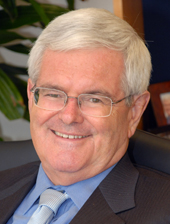 "Valley Forge: A Story of Endurance and Transformation"