AMES, Iowa -- One way to reduce the nation's childhood obesity epidemic is to identify children who may be predisposed for obesity before they are found to be overweight or obese through their body mass index (BMI). That's why a pair of Iowa State University researchers have developed the Family Nutrition and Physical Activity (FNPA) Screening Tool.

Gregory Welk, an associate professor of kinesiology and director of clinical research and community outreach at Iowa State's Nutrition and Wellness Research Center (NWRC); and Michelle Ihmels; an adjunct assistant professor of kinesiology and NWRC researcher, developed the screening tool as part of Ihmels' doctoral dissertation. It was developed using results from a comprehensive evidence analysis of childhood obesity conducted in partnership with the American Dietetic Association (ADA).

The FNPA tool assesses 10 constructs that were shown to be consistently associated with a child's weight status in the ADA's evidence analysis. The parent responses are scored to predict a child's likelihood of becoming overweight or obese.

The tool was first used with nearly 1,100 first graders and their parents from 37 Des Moines elementary schools six years ago. Subsequent BMI measurements of students the next year found the FNPA to have predictive validity for identifying home environments that may increase children's risk for becoming overweight.

"The standard practice for clinical obesity screening involves measuring height and weight to determine BMI," Welk said. "A physician or nurse might tell a child they were overweight or obese and the parent would then be told they have an overweight child. But that information is actually happening too late.

"The whole point of prevention is to intervene before a child becomes overweight and so the premise behind the FNPA is as a screening tool -- or an awareness tool -- to screen for home environments that may predispose a child to becoming overweight," he continued. "The research in Des Moines demonstrates that the FNPA tool may help to identify children that may be at increased risk of becoming overweight."

Welk will present research from those studies on Thursday and Friday, Sept. 16-17, at the Intergenerational and Familial Influences on Obesity and Related Conditions Symposium at the Wolfson Research Institute, Durham University, in Stockton, U.K.

The ISU researchers report they're now working with the ADA to develop an online version of the tool that can be customized for different applications, opening up additional opportunities for usage and research. They've seen the project evolve over time.

"The ADA brought us in on the physical activity side of their comprehensive evidence analysis about nine years ago," said Ihmels. "Factors such as physical activity, diet, stress, the home environment, and how the parents interact with the child all affect childhood obesity. And so essentially, the 10 questions in the survey address the 10 main factors that we found from this evidence analysis of previous literature."

Expanding the research and applications

While Welk says the initial study with Des Moines Public Schools validated the predictive value of the FNPA tool, the researchers are gathering new data from the student subjects, who are now sixth-graders, for a longitudinal study.

They're also working with Penn State University researchers to empirically test whether getting the FNPA feedback helps further reduce the prevalence of obesity or enhances BMI screening practices among Pennsylvania families. And they also have plans to administer the FNPA to families in more than 1,100 schools through a partnership with the National Football League's Play 60 campaign -- a program designed to tackle childhood obesity by getting kids active through in-school, after school and team-based programs.

Support for development and validation of FNPA was through a grant program funded by the United States Department of Agriculture and administered through Iowa State's NWRC. 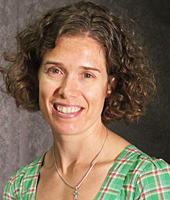 A pair of ISU researchers have developed the Family Nutrition and Physical Activity Screening Tool to identify children who may be predisposed for becoming overweight or obese before they are classified that way through their body mass index readings.

"The whole point of prevention is to intervene before a child becomes overweight and so the premise behind the FNPA is as a screening tool -- or an awareness tool -- to screen for home environments that may predispose a child to becoming overweight. The research in Des Moines demonstrates that the FNPA tool may help to identify children that may be at increased risk of becoming overweight."