ISU Greenlee School of Journalism Director and Professor Michael Bugeja and colleagues offer this tribute in memory of legendary broadcaster Jack Shelley. Shelley began teaching journalism at Iowa State in 1965 and retired as professor emeritus in 1982. Portions of this content originally appeared in the April 2006 issue of the Greenlee School publication, "the monthly memo."

In November 2005, one of the greatest broadcasters of all time approached Michael Bugeja, director of Iowa State University's Greenlee School of Journalism and Communication, with a special request.

The broadcaster, retired and in his 90s, sat down across from Bugeja in Hamilton Hall where he had taught some of the finest journalists in the business, including Kevin Cooney, KCCI; Jerry Bowen, CBS Evening News; and Terry Anderson, the Associated Press.

"I think my time is coming," he observed. "I want you to write my obituary while I am still alive, so I can edit it."

This is that obituary.

Shelley, a towering figure in real life at six-foot-three, was a journalism legend. Born in Boone, Iowa, on March 12, 1912, he witnessed the birth of broadcast journalism in its early years, covered World War II with the likes of Walter Cronkite and Edward R. Murrow, and inspired generations of ISU journalism students.

"I'll always remember listening with my dad to Jack Shelley's crisp, clear voice booming over the radio," Sen. Chuck Grassley, R-Iowa, recalled. "It was like listening to something from a higher power."

Shelley's interest in journalism began when he reported for his high school newspaper in Boone. After graduation, he took jobs at two regional railroads at the beginning of the Depression. In the fall of 1931, with $35 earned from railroad work, he enrolled in the University of Missouri journalism department.

After graduation in 1935, Shelley briefly worked at the Iowa Herald in Clinton before taking a job at Des Moines' WHO Radio, a 50,000-watt station. Shelley joined H.R. Gross as a two-man team delivering news live on the air because no recording equipment was available at the time.

Shelley remembered the era in an interview with Chris Allen, an ISU alumnus who earned his Ph.D. at Missouri, writing about Shelley's life for his dissertation. Some of the incidents recounted in this obituary are from Allen's dissertation.

"You have to remember that in those days, in the 1930s, the vast majority of our audience found radio news something brand new and very exciting," Shelley recalled. "All these people who lived in small towns and on the farms in Iowa had never had anything that brought news to them so quickly."

Bringing the world to Iowans

With radio broadcasting still in its infancy, Gross and Shelley developed their own methods, Allen wrote. They got help from the United Press, which began adapting their reports for broadcast.

Shelley said the station had a strong presence throughout Iowa and the region, featuring live talent shows, weekly barn dances, and news broadcasts in between segments.

When Pearl Harbor was bombed on Dec. 7, 1941, WHO broadcast a short wire report on the attack at 1 p.m. on that Sunday. Shelley, listening to the radio at his Boone home during a family dinner, called the station and directed the coverage from his kitchen table.

For the next five years, WHO would dedicate much of its coverage to war and its impact on Iowa and the Midwest.

Before the summer of 1944, the military would not allow overseas civilian correspondents from individual stations. As soon as the policy changed, Shelley was accredited by the U.S. Army and shipped out to Spa, Belgium, covering the Battle of the Bulge.

"The Nazis chased us out of Spa and into southern Holland, where we could file our reports," Shelley said.

In the field, whenever he saw soldiers, he got in the habit of calling out, "Anybody here from Iowa?" He found native Iowans on every battle front.

As the war in Europe began to wind down, Shelley reported on the final battles in the Pacific. Equipped with a recording device, Shelley taped the voices of Iowa patients in Hawaii hospitals. On Guam, he filed regular reports, including interviews with the B-29 crews bombing Tokyo.

After the first atomic bombs were dropped on Japan, Shelley had the rare opportunity to record the first interviews with the crews who had bombed Hiroshima and Nagasaki. Looking for the Iowa angle, Shelley learned that Enola Gay pilot Paul W. Tibbets had attended North High School in Des Moines.

After the interviews, Shelley knew he had a great story. Chris Allen quotes Shelley as saying the interviews were "the hottest thing we've ever had."

On Sept. 2, 1945, Shelley was aboard the U.S.S. Missouri to cover the formal Japanese surrender.

Years later, he was invited onboard the Missouri again-this time anchored in Pearl Harbor, Hawaii-to speak at a ceremony commemorating the 56th anniversary of the surrender.

At the end of the war, Shelley returned to Des Moines and his news director's job at WHO.

He also worked with CBS legend Edward R. Murrow in forming what would become the Radio Television News Directors Association (now the Radio Television Digital News Association), a professional organization founded to guarantee autonomy for news directors and standards for broadcast journalism. Shelley became the third person to serve as president of the group in 1950.

In 2000, he was awarded the RTNDA's John S. Hogan award, named after its first president. Other Hogan award recipients include iconic broadcasters Hugh Downs and Walter Cronkite.

Throughout the 1950s, Shelley continued to serve as the face of news for thousands of Iowans.

"If you lived in Iowa in the 1950s and 60s and didn't know who Jack Shelley was, then it's almost certain you didn't own a radio or TV," said Bob Greenlee, ISU alumnus and namesake of the journalism school in Ames.

"For many people, Jack Shelley was the news."

In 1953, Shelley was invited to witness the detonation of a nuclear device at the Atomic Energy Commission's Yucca Flats site in Nevada. The commission had designated "ANNIE" an open shot, which meant that reporters were allowed to view the blast from the NewsNob, a location six miles south of ground zero. Shelley was among 20 reporters selected to accompany about 1,500 soldiers in five-foot trenches just two miles away.

At 4 a.m., an hour and 20 minutes from blast-time, they were shuttled to the trenches. Shelley carried a battery-powered tape recorder. It was one of the few devices to survive with a usable recording of sounds from the event. The nuclear device was 16 kilotons and detonated from atop a 300-foot tower.

"With my eyes shut, I can see that tremendous light," Allen quoted from Shelley's report. "The earth is shaking under me. … There's the tremendous sound. This trench is being filled with dust."

In 1954, WHO received a license to begin broadcasting television signals. Shelley anchored the 6 and 10 p.m. newscasts and worked 12-hour days.

"If Jack said it was so, you could go to bed assured it was true. And when he said good night with that twinkle in his eye, you turned off the set feeling even better," Bowen said. "He was and is our Walter Cronkite."

From 1968 until 1988, Shelley served as the executive director of the Iowa Broadcast News Association. He was awarded the group's Distinguished Service Award when he retired.

In1971, the IBNA honored him by establishing the Jack Shelley Award.

"Jack Shelley didn't make broadcast history in Iowa, he lived it," said Mike Peterson, news director at KMA/KKBZ in Shenandoah, Iowa and past president of the IBNA.

"We thank him for everything he did in the media, at Iowa State, and with the IBNA."

As an educator, Shelley insisted on putting his students' needs above anything else. Some students who grew up watching his broadcasts found themselves working with a local hero in their classes.

"It was a privilege to have been one of his students," recalled Bowen. "Jack was actually reading my copy and kindly making suggestions that continue to serve me for four decades."

Patricia Dean, a Chicago broadcaster for 18 years, and now associate director of the School of Journalism at the Annenberg School for Communication, remembered Shelley as a beloved adviser.

"We should not underestimate how important a strong mentor is to students," Dean said. "At a time when women were not encouraged to enter some areas of the profession, Jack said 'nonsense.' He believed in me and gave me the education to achieve my goals and the courage to pursue my dreams."

"He never made it seem like work," Cooney said. "I still remember his emphasis on realizing that television, while it reached thousands, was really a personal, one-on-one style of storytelling. There is not a day that goes by that I don't put into practice something that Jack taught me."

Shelley often said his days at Iowa State's journalism department were among his happiest.

"Then, as now, we had such respect for each other," he noted. "You had the feeling at Iowa State that when somebody had an accomplishment, that you all shared in it."

Shelley was a founding member of the Iowa Freedom of Information Council, and served as its president in 1981. He retired from teaching at age 70 at the end of the 1982 school year.

In 1983, the Radio-TV Division of the Association of Education in Journalism and Mass Communication made Shelley the first winner of its Distinguished Broadcast Journalism Educator Award.

In retirement, Shelley worked in Boone as president of its historical society, was a member of the board of ISU's College for Seniors, and an honorary member of the Greenlee School's Advisory Council.

Shelley received the J.W. Schwartz award in 1993, the highest award given by Iowa State University for accomplishments in journalism and mass communication.

Noting the award, The Des Moines Register said Shelley had earned a place in Iowa journalism history for being a pioneer and a risk-taker as a professional, and helping to launch countless careers as an educator.

"If I get really personal, the blessings of my life were that I was married to two lovely women and a father to two wonderful sons and then a grandfather and great-grandfather," Shelley said in 2005. 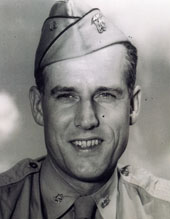 Jack Shelley was a Navy-accredited war correspondent for WHO Radio. (Photo courtesy ISU Greenlee School of Journalism and Communication.)

Courtesy of ISU Special Collections, click on this iTunes page to hear four historic Jack Shelley broadcasts from the Battleship Missouri, Yucca Flats and more. (If you don't have iTunes, you can download it free here.)

Iowa Broadcasting.com has footage of Jack Shelley's sign off as the WHO-TV news anchor in August 1965. You can see it in the Archives of Iowa Broadcasting, administered by Wartburg College, here.

The Iowa Broadcast News Association's Jack Shelley Award is the IBNA's highest honor. You can see the list of award winners here.