Ames, Iowa - An Iowa State University researcher searched for new genes that are turned on during infection in a type of mosquito that is not only a pest, but transmits disease-causing pathogens.

Lyric Bartholomay, assistant professor of entomology, along with colleagues from around the world, infected the common southern house mosquito (Culex quinquefasciatus) with various pathogens to see which mosquito genes are activated in response to the infection.

Bartholomay is the first author on the paper, "Pathogenomics of Culex quinquefasciatus and Meta-Analysis of Infection Responses to Diverse Pathogens," to be published in the Oct. 1 issue of the journal Science.

The southern house mosquito is the third of the three most important mosquito disease carriers to have its genome sequenced. The first was an African mosquito (Anopheles gambiae) that transmits malaria parasites. Malaria infects 250 to 500 million people each year and kills nearly one million people annually, mostly young children in sub-Saharan Africa. The second was a tropical mosquito (Aedes aegypti) that carries yellow and dengue fever viruses. 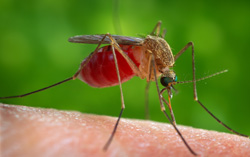 The southern house mosquito is common to many areas of the United States and around the world. It feeds on blood from birds, livestock and humans, and transmits a wide variety of deadly and debilitating human and veterinary pathogens. In addition to transmitting the West Nile virus, the mosquito can carry the St. Louis encephalitis and the microscopic roundworm that causes lymphatic filariasis - a debilitating tropical disease that affects up to 40 million people every year.

Bartholomay participated in cataloging the infection-response genes for Aedes aegypti in a manuscript published in 2007. She was chosen to be first author of the current Science paper because she has experience describing the immune responses in the northern house mosquito (Culex pipiens).

In the research, mosquitoes were infected with viruses, worms and bacteria. The genes of the mosquitoes were monitored to see which changed during the response to infection and therefore could ward off disease.

"What we're trying to do is broaden our understanding of infection response genes beyond those that we expect to be there," said Bartholomay.

"We took a two-pronged approach to understanding infection responses," she added. "First, we scoured the genome sequence looking for those immunity genes that the mosquitoes can use to respond to an infection. Then, we looked at what genes comprise broad spectrum and specific immune responses.

"We then took it one step further and compared the infection responses in Culex quinquefasciatus to similar infections in Aedes aegypti and Anopheles gambiae."

Bartholomay also worked with colleagues to analyze the mosquito's genome, as reported in a companion paper that will also be published in the current issue of Science.

What we're trying to do is broaden our understanding of infection response genes beyond those that we expect to be there.