AMES, Iowa -- A new house has just gone on the market in Corning, a fact that normally is not big news. But this house holds special meaning for rural Iowa. It effectively joins affordability and energy efficiency, a combination not readily found in the housing of smaller communities around the state.

Iowa State University students designed the "Iowa House" in the College of Design's spring 2010 "Bridge Studio" as part of a collaboration between federal, state and local agencies and organizations (see sidebar). It was designed to meet the standards of the Iowa Department of Economic Development's Green Streets Program, which promotes sustainable building and community design. 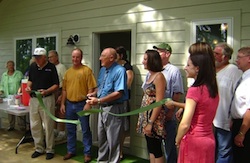 The 1,080 square-foot house has airtight construction, high insulation levels, the smallest furnace on the market, and orientation and windows that maximize the sun's energy. It opened with fanfare during a ceremony on July 22 and ribbon cutting by Corning Mayor Guy Brace.

Best of all, says Nadia Anderson -- the ISU assistant professor and extension specialist who led the design effort -- the house performs well in energy testing, which will translate into lower utility costs for the future homeowners.

"The house was designed and built using a performance-based system," she said. "We specified the R-value levels for walls, for example, but the contractors could use the materials they wanted to achieve it." 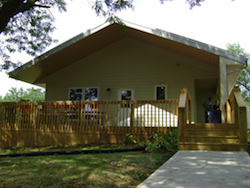 Iowa House from the front.

In an energy audit conducted by the Des Moines firm Cenergy, the Iowa House passed "with flying colors." The air-infiltration (blower door) test result for the house was 171 cubic feet per minute (1,500 is typical; below 1,000 is considered good). And the overall energy efficiency was 92 percent, making the Iowa House the first in Cenergy's experience to pass without needing remediation.

"Also, in testing for heat loss in the ductwork, there was a temperature difference of only two degrees between the temperature at the furnace and that at the end of the longest duct run," Anderson added.

Anderson said the local contractors were initially skeptical about some of the energy-efficiency techniques in the design, which they learned during Iowa Center on Sustainable Communities training workshops on best practices for affordable, energy-efficient construction.

"But when they saw how well the house performed in the audit, they were very positive about things like advanced framing techniques and insulating the ductwork," she said.

In addition, the house is designed to use as little water as possible with low-flow plumbing fixtures and appliances. Rain barrels collect water from the roof for irrigation and sustainable landscape strategies help storm water infiltrate on site to prevent erosion and downstream flooding. Shortly before the opening, five inches of rain fell in Corning and, according to site director Martin Olive, none of it left the site.

The house appraised at $130,000, approximately equal to the construction costs, and will be sold to a household that is at or below 120 percent of area median income. The reduced utility costs will also reduce overall monthly costs for the homeowner.

Students' rendering of their design.

The City of Corning received a grant from the federal Neighborhood Stabilization Program, and used $120,000 to fund construction. Additional in-kind funding (land cost and some labor and materials) was supplied by the city. When the house is sold, the money goes back to the city and can be reinvested as officials see fit.

"This is pretty significant. Most of these programs don't allow for this kind of reinvestment of the funding," Anderson said. "So this will give Corning future opportunities for more housing or other civic amenities."

The house has also sparked a lot of interest from other community groups and local agencies.

"A group from Council Bluffs has met with me about the need for multiple units for a depressed neighborhood," Anderson said. "Storm Lake is considering a multi-year, multi-pronged project with ISU's Design College. And we're looking at a multifaceted project with neighborhoods on the west side of the river in Cedar Rapids. It's more of a neighborhood strategy on an urban scale rather than a single house."

Any of these projects have potential for future students in Anderson's award-winning "Bridge Studio," the upper-level class that worked on the Corning house as well as projects in Des Moines and Cedar Rapids.

Anderson hopes to conduct research on the Iowa House once it's occupied to be sure it performs as designed.

"It's hard to believe that it wouldn't lower energy costs, but at the end of the day we need to gather the data," she said.

Although she does not favor "handing out house plans" for the exact replication of the Iowa House, she does hope the design and construction principles will be adopted by financing agencies, designers and builders.

"In my view, it's more about an organization or community hearing about the project and wanting Iowa State to work with them on something similar," Anderson said. "It's my hope we can complete enough projects, collect enough data and prove this works so the impact of what we're doing is clear to policymakers and financing organizations. This will have the greatest impact in using sustainable design as a strategy for affordable housing."

Iowa State students designed the "Iowa House" in the College of Design's spring 2010 "Bridge Studio" as part of a collaboration between federal, state and local agencies and organizations It effectively joins affordability and energy efficiency, a combination not readily found in the housing of smaller communities around the state. The house opened in Corning on July 22. 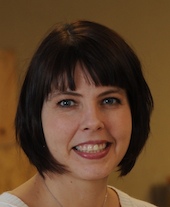 "In my view, it's more about an organization or community hearing about the project and wanting Iowa State to work with them on something similar."

Building bridges between practice and education