AMES, Iowa - The James Beard Foundation announced its leadership awards in New York City this week and among the honorees is a distinguished fellow at Iowa State University's Leopold Center for Sustainable Agriculture.

Fred Kirschenmann, professor in the Department of Philosophy and Religious studies who served as director of the Leopold Center from 2000 to 2005, is also president of Stone Barns Center for Food and Agriculture in Pocantico Hills, N.Y., and has served on the USDA's National Organic Standards Board and the National Commission on Industrial Farm Animal Production.

Kirschenmann, who was honored in part for his lifelong work furthering sustainable food and farming practices, and nine other awardees will be honored guests at a dinner hosted by the foundation Oct. 12 in New York City. Other honorees include First Lady Michelle Obama for her "Let's Move" initiative aimed at reducing childhood obesity.

Kirschenmann already knows many of those at the award ceremony. but he will be most eager to meet at the first lady.

"There are several honorees who are good friends of mine and whose work I have admired for many years, especially Craig Watson [1974 bachelor's degree and 1976 master's degree from Iowa State], Alice Waters, Will Allen and Fedele Bauccio," said Kirschenmann. "Of course being on any list with First Lady Michelle Obama is fantastic. I hope I finally get to meet her at the awards ceremony."

The ideals of sustainable agriculture were instilled in Kirschenmann by his father in the wake of the Dust Bowl of the early part of the last century.

"My father somehow understood that the devastation of the Dust Bowl was not just about the weather, but also about the way farmers farmed, and he was determined that, 'That was never, ever, going to happen to his land again,'" he said. "So he inculcated a land ethic in me at a very young age. Later when I first entered a career in higher education, I was introduced to organic agriculture by a student of mine and based on research he had done, pointed out to me how dramatically soil health could be improved with good organic management practices. That eventually led me to decide to go back to our farm in North Dakota to convert it to an organic farm to restore the biological health of our soils."

Kirschenmann believes that the future of sustainable agriculture will be a result of new realities on the farm and across the globe.

"We will have to redesign a food system that functions well under these new circumstances," he said. "This will need to be a food system that functions more like wild nature, which operates on sunlight, and on self-renewing and self-regulating biological synergies. This means that everyone in each local ecosystem - farmers, researchers, politicians, consumers, ordinary people - will need to become engaged as 'food citizens' to design food systems that function well in these new circumstances in each watershed."

According to the James Beard Foundation release, honorees were chosen by an advisory board comprised of a dozen experts from diverse areas of expertise. The award recognizes specific, outstanding initiatives as well as bodies of work and lifetime achievement. Among the criteria used to select final honorees are excellence of work, innovation in approach and scale of impact within a community or the nation. 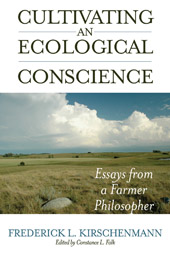 Kirschenmann speaks frequently on sustainabilty and has also written a book on the subject.

Fred Kirschenmann, professor in the Department of Philosophy and Religious studies
Loading...