AMES, Iowa -- It doesn't take a psychologist to see American unhappiness all around. With the sluggish U.S. economy, high unemployment, sometimes contentious political debate and continuing military operations abroad, Americans have been dealing with their fair share of unhappiness.

And that's the underlying theme Dean Bakopoulos chose for his new novel, "My American Unhappiness" (Houghton Mifflin Harcourt), which was released earlier this month to rave reviews, including O, The Oprah Magazine naming it the No. 1 "Title to Pick Up Now" for June.

Now an assistant professor of English who is on the faculty of the MFA Program in Creative Writing and Environment at Iowa State University, Bakopoulos has personally felt the anxiety underlying the recent American condition and used it as inspiration in his book.

"I was writing full-time, and the recession hit when I was a full-time novelist. And man, did things dry up for me," Bakopoulos said. "All my freelance magazine work was put on hold. My publisher put this book on hold because of the economy. So I was writing -- as the father of two children who is the sole breadwinner in my family -- out of a sense of panic and anxiety. And I wanted to take that and try and put it into this novel -- and hopefully I did it with some humor."

And what is that profound message?

"The main character [Zeke Pappas] is someone who's just been battered collectively along with the rest of the country, whose personal bad luck has sort of mirrored the darker moments our country has gone through in the last 10 years," Bakopoulos said. "And he has become pretty cynical about it, but he won't admit his life is sort of spiraling out of control -- just in the same way we're hesitant to admit that things we're doing in this country aren't sustainable.

"So I wanted to do this darkly comic novel about a character who was a modern day Job -- if Job were an intellectual in a college town in the Midwest," he continued. "And his story would also speak to this condition that a lot of things we really believed in -- on both the right and the left politically -- are no longer sustainable economically. A lot of things we thought we valued are not things we're going to be able to have in the next generation."

In the book, Pappas is a 35-year-old scholar who is the director of a humanities institute in Wisconsin, where he is charged with conducting a national survey of American unhappiness. In the process, misery becomes both his work and his hobby. Fate also afflicts him with a string of personal tragedies. Already a borderline alcoholic widower caring for his two orphaned nieces, Pappas learns that his mother is dying of cancer and that she plans to deny him custody of the girls unless he gets married before she dies. His desperate courtship efforts provide the book's comic relief.

But Bakopoulos acknowledges that there's nothing funny about the novel's sobering theme.

"Most people are feeling kind of helpless that the things they really believed in, they now have to justify on an almost daily basis -- and it's painful to do that," he said. "So I think this relates to anyone's who's in an industry or a public sector where things are coming to an end -- that people feel a sense of, 'What are we going to do next?'"

Bakopoulos says he's received emails and letters from readers who claim he's captured their own American unhappiness in the book, which has also received favorable reviews from National Public Radio and Vanity Fair, among others.

It's the second novel for Bakopoulos, who has won fellowships from the National Endowment for the Arts and the Guggenheim Foundation. He published "Please Don't Come Back from the Moon" in 2005 (Harcourt/Mariner Books), which was selected as a New York Times "Notable Book" for that year. That novel subsequently had its rights purchased by Lionsgate -- the leading independent film entertainment studio. Bakopoulos has been working with Lionsgate producers in Hollywood on a proposed television series based on the book, which is still in development.

Additional information about Bakopoulos and his books is available at his website. Starting in August, he'll serve as a visiting professor of English at Grinnell College during the next academic year, although he'll continue to serve on the Iowa State faculty and will advise MFA students. 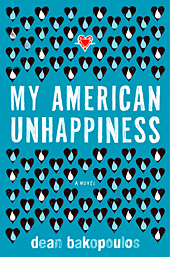 Dean Bakopoulos, an Iowa State assistant professor of English who is on the faculty of the MFA Program in Creative Writing and Environment, is author of the new book, My American Unhappiness (Houghton Mifflin Harcourt). O, The Oprah Magazine named the book the No. 1 "Title to Pick Up Now" for June, and it also earned praise in a Sunday New York Times review.

"Most people are feeling kind of helpless that the things they really believed in, they now have to justify on an almost daily basis -- and it's painful to do that. So I think this relates to anyone's who's in an industry or a public sector where things are coming to an end -- that people feel a sense of, 'What are we going to do next?'"