AMES, Iowa - When a group of Nobel Prize winners meets in Lindau, Germany, in June, an Iowa State University graduate student will be among the dignitaries.

West Des Moines native Scott Boyken hasn't won the prestigious prize, but he is one of a group of promising researchers invited to the meeting this year.

Boyken is one of 550 young scientists chosen from more than 25,000 applicants worldwide to attend the Nobel Laureate Meetings at Lindau that will focus on research in physiology and medical sciences.

The conference has hosted more than 25,000 researchers from more than 80 countries since it began in 1951.

At least 20 Nobel Laureates will attend the conference and meet the researchers to share ideas and inspiration.

Boyken, who is pursuing his doctoral degree in bioinformatics, says that, in addition to the prestigious guest list, the conference is different from ones he has attended in the past. 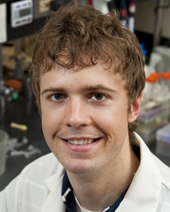 "It's not like a typical conference where you go and present your detailed research," said Boyken. "This is about the big picture, generating ideas and making connections. The focus is on communicating science and the future of science."

Boyken plans to graduate in about a year and thinks the conference could help him meet some of the leaders in his field.

Boyken, who completed his undergraduate work at Luther College in Decorah in 2007, and is currently a graduate student in ISU's Bioinformatics and Computational Biology Program, was nominated by his advisors, Amy Andreotti and Robert Jernigan, professors in the Department of Biochemistry, Biophysics and Molecular Biology.

"Scott is remarkable in his persistence. He is a student who has remarkable new ideas. He came as a summer undergraduate student and then applied to ISU for graduate school. His research focuses on how immune systems in cells operate and how they lead to fighting pathogens," said Jernigan.

"Formerly, studies on one of the domains of the Itk protein (that Boyken researches) have simply not been feasible. Former students have struggled to produce the domain with no success, but Scott has identified an elegant approach that permits him to produce large amounts of the folded protein," Jernigan added. "Because of his own ingenuity and persistence, he has now opened up a new area of investigation that is certain to yield important results."

Protein domains are the smaller subunits of proteins that carry specific functions. Scientists will often simplify the complex protein molecule by focusing on a single domain.

Meeting the most accomplished researchers in your field could be a little intimidating, but Boyken says he is "more excited than nervous" about the opportunity and will make a serious effort to meet those Nobel Laureates whose work he admires.

Boyken hopes to be a professor some day with his own research laboratory, and says it would be an outside chance that he would ever win a Nobel Prize of his own.

"I think most scientists dream of winning the Nobel Prize, including myself, but I've got to be realistic," he said. "It is such a long shot, and to be a successful in science, you have to keep the focus on the science itself."

This is about the big picture, generating ideas and making connections. The focus is on communicating science and the future of science.

Doctoral student Scott Boyken is one of 550 young scientists chosen from more than 25,000 applicants worldwide to attend a Nobel Laureate conference in Lindau, Germany, that will focus on research in physiology and medical sciences.