Global ISU study: Invasive species widespread, but not more than at home range

AMES, Iowa - Invasive plant species have long had a reputation as being bad for a new ecosystem when they are introduced.

Stan Harpole, assistant professor of ecology, evolution and organismal biology at Iowa State University, is founding organizer of a team of more than 70 researchers working at 65 sites worldwide that tested that assumption.

They wanted to know if it is true that problematic invasive species often spread widely in their new habitats because they don't encounter predators or diseases that help keep them in check in their home ranges.

"There is this assumption that when plants invade a new area that they become much more abundant in the new area than they were in the native areas," said Harpole. "It turns out that, on average, they aren't any more abundant away from home than they are at home."

Harpole says there is a "rule of 10s" that can apply to invasive species. 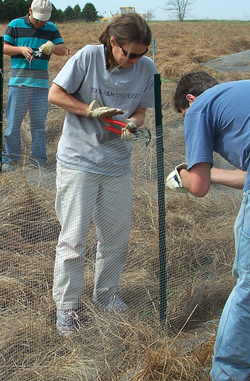 Members of Harpole's lab construct a fence around the test plot to keep animals from eating the plants.

Harpole points to the kudzu plant as an example.

Kudzu was introduced from Asia as a soil erosion plant more than a century ago. It now chokes out native species from Texas to Maine to Florida, according to the U.S. Department of Agriculture.

Problem plants like this are uncommon when compared to all the exotic species in a region, but they do get the most interest and may give the impression that species that escape their home range often spread and take over new habitats and become more abundant than before, says Harpole.

Invasion can also be thought of more generally as a process in which new species enter new habitats. Even plants now considered native were once invaders, says Harpole.

When glaciers receded from the Midwest 10,000 years ago, there were no native species in the area - the retreating ice left bare ground open for invasion.

"All the plants that are now seen as native were invasive in the past in the sense that they had to spread across the landscape," he said.

"What's different today is that we move plants so much faster than they would move by themselves. Now a species can become global in a matter of years, where it may have taken tens of thousands of years in the past," said Harpole.

Harpole is coauthor of a research paper led by Jennifer Firn of Queensland University of Technology, Australia, and is published in the journal Ecology Letters. Coordination of the study was funded by the National Science Foundation.

Worldwide research has long been a problem for scientists.

Cost associated with travel and other hurdles imposed by international barriers slow attempts to work across borders.

Stanley Harpole is trying to change that.
To complete recent global research, Harpole and colleagues collaborated through a worldwide effort he co-founded called Nutrient Network or Nutnet.

Prior to this study, Harpole was trying to look at ecological questions worldwide by reviewing available published research on the subject using a type of statistical analysis called meta-analysis.

"Since many studies tend to be done in one site, we were thinking about how we can study the planet as a whole," he said.

But meta-analysis can be problematic because of varying sample sizes and methodologies in different published studies.

"That's when we had this great idea to do exactly the same experiment everywhere," said Harpole.

Harpole, with a core team of colleagues, then outlined a uniform set of methods for a global study so data could be compared among areas.

Word spread, and researchers from more than 65 sites in nine countries have joined the effort, including one site at Chichaqua Bottoms Greenbelt in Polk County, Iowa.

Some of the group's first results were recently published in the journal Ecology Letters.

"We think this is a really exciting new way to study the earth," said Harpole.

Nutnet plans to publish more research in the future with more and more collaboration from colleagues around the globe.