On the third and final day of this year's Formula Sun Grand Prix for student-designed and student-built solar cars, Team PrISUm raced for another 156 laps around a nearly one-mile section of the Indianapolis Motor Speedway's road course.

That was good enough to maintain the team's hold on fourth for the grand prix. Anthelion (the $250,000 car is named for the rare halo that can appear opposite the sun) completed a total of 403 laps. The University of Minnesota won the competition with 569 laps.

"We're real happy with the way our car has been performing," said Evan Stumpges, a team leader and a senior in mechanical engineering from Pauma Valley, Calif. "It has been nice to drive Anthelion to its potential."

The solar car suffered chronic electrical problems during last summer's 1,100-mile, cross-country American Solar Challenge. But, when the electronics worked, the car could race at the speed limit.

The students of Team PrISUm have worked over the past school year to troubleshoot and revise Anthelion's electrical systems and test the car's performance. The Indy competition would be the car's last chance to race; the team is already designing and building a new car for next summer's cross-country race.

And - except for a crack in the frame that cost the team four hours of race time on Thursday - Anthelion went out a racer.

"We're pretty happy with it now," said Stumpges. "I wish it was where it is now when we ran the big race last summer." 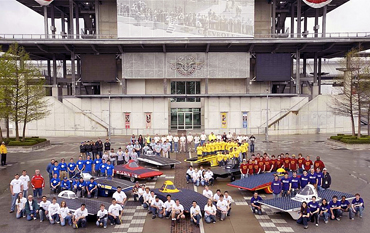 The Formula Sun Grand Prix grid poses in front of the Indianapolis Motor Speedway's Pagoda. Team PrISUm is to the right in the cardinal shirts. Team PrISUm photo. Large photo. 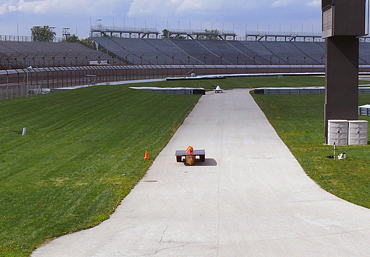 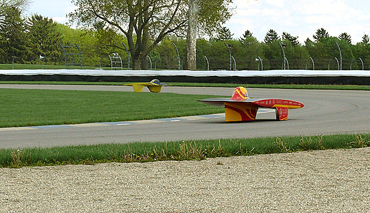 "We're real happy with the way our car has been performing. It has been nice to drive Anthelion to its potential."

Evan Stumpges, a team leader and a senior in mechanical engineering from Pauma Valley, Calif.

Check out the Team PrISUm photostream and race blog.