Now he knows the idea, which produces a new animal feed and cleans water that can be recycled back into ethanol production, works more efficiently in batches of up to 350 gallons than on a lab bench.

What van Leeuwen and a team of Iowa State researchers are producing is a fungus, Rhizopus oligosporus, that makes a high-quality, high-protein animal feed from the leftovers of ethanol production. The process of growing the fungus also cleans water from ethanol production so that it can be recycled back into fuel production. And the process, called MycoMeal, could one day produce a low-cost nutritional supplement for people.

The project has two patents pending and has won several major awards, including a 2008 R&D 100 Award presented by R&D Magazine, the 2008 Grand Prize for University Research presented by the American Academy of Environmental Engineers and a 2011 Honor Award in University Research from the academy. The project also contributed to R&D Magazine naming van Leeuwen its 2009 Innovator of the Year.

The research team working on the project is led by van Leeuwen and includes Nick Gabler and Mike Persia, assistant professors of animal science; Mary Rasmussen, a post-doctoral research associate in food science and human nutrition; Daniel Erickson, Christopher Koza and Debjani Mitra, graduate students; and Brandon Caldwell, a graduate of Iowa State. The project is supported by a three-year, $450,000 grant from the Iowa Energy Center and a Smithfield grant from the Office of the Iowa Attorney General. Lincolnway Energy of Nevada, Cellencor Corp. of Ames and Iowa State's Center for Crops Utilization Research and BioCentury Research Farm are also supporting the project.

Here's how their process works to improve dry-grind ethanol production:

For every gallon of ethanol produced, there are about five gallons of leftovers known as stillage. The stillage contains solids and other organic material. Most of the solids are removed by centrifugation and dried into distillers dried grains that are sold as livestock feed, primarily for cattle.

The remaining liquid, known as thin stillage, still contains some solids, a variety of organic compounds and enzymes. Because the compounds and solids can interfere with ethanol production, only about 50 percent of thin stillage can be recycled back into ethanol production. The rest is evaporated and blended with distillers dried grains to produce distillers dried grains with solubles.

The researchers add fungus to the thin stillage and it feeds and grows into a thick mass in less than a day - van Leeuwen calls it "lightning-speed farming." The fungus removes about 60 percent of the organic material and most of the solids, allowing the water and enzymes in the thin stillage to be recycled back into production.

The fungus is then harvested and dried as animal feed that's rich in protein, certain essential amino acids and other nutrients. It can also be blended with distillers dried grains to boost its value as a livestock feed and make it more suitable for feeding hogs and chickens.

Van Leeuwen said the production technology can save United States ethanol producers up to $800 million a year in energy costs. He also said the technology can produce ethanol co-products worth another $800 million or more per year, depending on how it is used and marketed.

Now that the project has moved from a campus lab to the Iowa Energy Center's BECON facility in Nevada, van Leeuwen said researchers are working to improve the process at larger scales.

"We're adding and subtracting, doing things differently and redesigning our process all the time," he said.

Even so, the process has developed enough that researchers can use simple screens to harvest pellets of the fungus from the project's 20-foot high reactor. They're feeding some of the fungus to chickens and will soon start feeding tests with hogs. A next step could be testing the fungus for human consumption. (University leaders have tried the fungi and researchers regularly eat it, van Leeuwen said.)

As the project has successfully scaled up, so has van Leeuwen's optimism that the process could help the biofuels industry.

"Implementation of this process addresses criticism of biofuels by substantially lowering energy inputs and by increasing the production of nutritious animal feed," van Leeuwen said. "The MycoMeal process could truly revolutionize the biofuels industry." 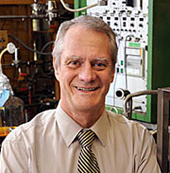 Iowa State's Hans van Leeuwen and a team of researchers have built a pilot plant to test a process designed to improve ethanol production. They're growing fungi on some of ethanol's leftovers to make a quality animal feed and to clean water so it can be recycled back into fuel production. The researchers think the fungi could also be developed into a low-cost nutritional supplement for people.

"Implementation of this process addresses criticism of biofuels by substantially lowering energy inputs and by increasing the production of nutritious animal feed. The MycoMeal process could truly revolutionize the biofuels industry."