One was a soldier from Hampton, Dean Edward Fredericks, who died in the Korean War.

Iowa State is able to memorialize Fredericks this Veterans Day thanks to the help of his sister, Ruth Hannah, of Rock Creek, Ohio, who shared remembrances. Kathy Svec, ceremony coordinator and retired ISU Memorial Union marketing director, researches each person through local newspapers, genealogical and historical societies, yearbooks, phone directories and online resources to track down family members and piece together each soldier's life story. 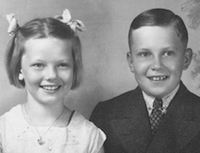 Fredericks was born Oct. 24, 1926, to Edward and Ardis. At the time, they lived on a farm southwest of Coulter. When he was 11 and was 7, the family moved to a farm in Chapin. Fredericks' life was full with 4-H, baseball, basketball and youth group activities in the Chapin United Methodist Church.

At the time, it was obvious to all that the boy was fascinated with anything that flew in the sky. His main hobby was making small airplanes and hanging them from his bedroom ceiling.

In 1942, the Fredericks family moved again -- to a farm north of Hansel. At age 16, Fredericks adjusted easily. A good student, he excelled at math. Fredericks played first base on the baseball team and guard on the basketball team. With his sister, he played saxophone in the Hansell High School band (he played tenor and Ruth played alto). And he met Marilee Uhlenhopp -- the high school sweetheart who would later become his wife.

After graduating in 1944, Fredericks enrolled at Iowa State. He attended from November 1944 to February 1945, majoring in engineering.

As World War II persisted, Fredericks left school to enlist in the Air Cadets. By the time he had received training, however, the war ended.

Fredericks returned to farm life in Iowa. At the time, a group of young men in Hampton started a flying club. Fredericks joined and received his certificate for solo flight from Kramer Airport in May 1948. He also took some courses at Iowa State Teachers' College in Cedar Falls before re-enlisting in the Air Force in June 1950.

After training in Texas and Alabama, Fredericks was commissioned a second lieutenant on Dec. 15, 1951. The same day, he married his Marilee at the base chapel. Stationed first at Williams Field, Chandler, Ariz., Fredericks received jet plane training. He later prepared to be a fighter-gunner in the F-86 Sabre jet at the Las Vegas Air Force training station.

An Air Force buddy, Jim Quinn, Arvada, Colo., recalled the the experience for ISU's Svec: "We were in a pressure cooker. The training was intense and stressful. I had my problems and wound up walking, but Dean breezed through the program ... and went on to advanced training in the P51 Mustang." 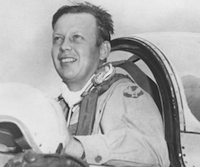 Following additional training on the F86 Sabre jet in Nevada and a home leave, Fredericks arrived in Korea in May 1952. He was stationed at an Air Force base south of Seoul as a jet pilot with the 16th Fighter Interceptor Squadron, 51st Fighter Bomber Group.

Two months later, Fredericks was ferrying a T33 Shooting Star on a training mission between Kangnung Airfield K12 and Pohang Airfield K-3 in South Korea when some kind of accident occurred.

According to Quinn, "the 33 had characteristics that were not pilot friendly ... we had lost a classmate in a T33 accident at Williams Air Force Base." There also was speculation that the plane may have been hit by lightning.

Fredericks died that day, July 5, 1952. During his brief time in the war zone, he had been flying regularly, completing 25 missions. He was 25 years old.

Lt. Dean Fredericks was laid to rest with full military honors on Sept. 26, 1952, in Hampton. A month later, his wife was notified that he had been awarded the Air Medal and Distinguished Flying Cross for meritorious achievement while participating in aerial flight.

"Dean was one of the good guys. He was solid, mid-American, patriotic, a Christian and a true friend," Quinn said. "The impact that he had on my life has been with me for the past 60 years."

"The impact that he had on my life has been with me for the past 60 years."